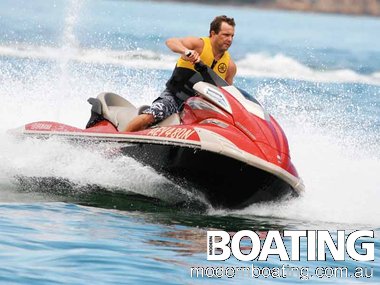 TWO FOR ONE – This innovative newcomer will set the boat show circuit on fire.

At Modern Boating we test (on average) 15 boats per edition, which equates to some 120 boats per year. That’s a lot of boats! But it certainly keeps us up-to-date with current boating trends. It also gives us the opportunity to make informed comparisons between vessels. And following this test of the latest Sealine F42/5, I can confidently say this is one of the most innovative boats to hit Aussie shores in years.

Like most boats in this class, her standard of fit-out and finish is first rate and she utilises the standard two double cabin galley down layout as seen in most 42-foot flybridge cruisers. So what makes this boat so different?

It’s not one feature; it’s many that combine to deliver an amazing, value-for-money boat that’s poised to set the Aussie boat show circuit on fire.

The first question show goers will ask is: “What is she, a 42 or a 45-footer?” The simple answer is she’s both.

TWO FOR ONE
A touch of a button engages Sealine’s patented extending cockpit system. The entire transom slides back, extending its length by three feet and almost doubling the aft cockpit’s area. With the cockpit extended you can throw in a big table and six chairs for those that can’t fit on the transom lounge. So 10 people can sit down in comfort to enjoy an alfresco meal in idyllic surroundings.

But the system doesn’t only give the owner extra entertaining space, the extending transom also cuts down on berthing costs (you pay per foot at the marina), because you only have to pay 42-footer prices.

The extending transom also aids boarding for those who aren’t slight of foot. With the boat backed into the marina the platform extends out over the marina decking, so they don’t have to step over water to board.

If you think the extending transom is a great idea, then the 42/5’s rough water handling abilities will blow you away.

PERFORMANCE & HANDLING
Like many of her competitors, Sealine has designed an excellent hull with wide, down-turned chines that she carries well forward. These deliver top lateral stability and a dry ride. Her sharp bow entry slices through chop and swells cleanly, while having the props in tunnels allows them to bite into clean water for tight turns with no tail slippage. But Sealine has gone a step further and added metal tunnel extensions to the 42/5’s transom, which basically add another few feet to the hull’s waterline length. These negate the need for trim tabs, which, while they are fitted, are only required to correct lateral trim problems caused by weight distribution or wind blowing onto the bow. At 25 knots and running at 45 degrees across the one metre swells coming in through Sydney Heads, the hull was rock solid. Even head-on into the sea, she didn’t bang and crash as the waves (that were no more then 10 feet apart) bore down on the hull. It performed effortlessly. The boat didn’t porpoise excessively and the ride was comfortable.

Fuel usage also rates a mention, because cruising at 24 knots this Sealine used only 61.8lt per hour (both engines). A pair of Cummins QSC 500hp diesels provide the power for the 42/5. These were surprisingly quiet and even at full noise didn’t disrupt conversations anywhere on the boat. Other engine options include twin Volvo D6 370hp diesels, twin Volvo TAMD 430hp diesels, or twin 480hp Volvos.

GOING BELOW
There’s a massive amount of storage in the locker that houses the Genset. An adult can easily climb in here and move to the transom where there’s a removable panel to access the rudder linkages and steering gear. This makes servicing and repairs a whole lot easier.

But the cockpit innovations don’t stop here. Every possible storage space has been utilised. The curved glass sliding saloon doors are vented to stop misting and there’s a handy locker in the cockpit roof that houses the aft cockpit table. Sealine has also designed a quality set of cockpit covers that securely enclose this area and only take a few minutes to set-up. They’re a Godsend.

Topside, the extended flybridge provides the roof over the aft cockpit and a massive sunpad for those wishing to soak up a few rays. Just be careful you don’t step on the vinyl cover that closes off the flybridge stairs, or you could find yourself back in the aft cockpit faster than you intended. The flybridge helm seat also swivels to become a side bench seat, which converts the bridge into a lounge/dining area.

Moving to the bow is a safe affair thanks to the extra-wide walkways around the main cabin and the thigh-high bowrail. There are foot controls for the anchor windlass (with a remote on the flybridge), an anchor locker that’s deep enough to hold more chain than you’ll ever need and the plough anchor fits into a clever recess in the bow, so when stowed it can’t get in the way.

Step into the spacious open-plan saloon and even more surprises await. The dinette quickly converts into a large, queen-sized innerspring bed, but unlike most boats, by moving the dining table to its alternate position, the table can still be used when the bed is erected. There are also electrically operated sliding windows, so extra ventilation is only the touch of a button away. If you don’t want to turn on the air conditioning, that is.

At the helm, comprehensive instrumentation (featuring Smartcraft gauges) allows the skipper to keep an eye on how things are performing, but watch your head as you step up to the helm because the roof ‘s a bit low. Seated at the helm, all-round vision is good, but taller drivers may have to lean forward a tad at low speeds to check all quarters. This isn’t a problem once the boat is planing.

The fully equipped galley also rates a mention, not only for its extra bench space and storage, but for the way the cupboards have been designed to take full advantage of available space. Plus, all the draws open on metal frames, have solid metal hinges and lock securely so they don’t rattle. Cookie even gets an opening porthole to see outside and get a breath of fresh air when in the galley.

The opulent forward stateroom also has plenty of storage. Its queen-size island bed lifts and bends in the middle for easy access to items stowed under it. The starboard stateroom has two single beds with a clever tray-storage system in between, which swings down to create a flat base for the large double bed. This cabin has good headroom and hanging lockers with solid metal locks that don’t rattle.

OVERALL
If this were my boat, I’d be sleeping in this cabin. It has three portholes for good ventilation and you won’t have to listen to water slapping against the hull all night.

With a base price of $850,000 and a construction standard that’s second-to-none, the F42/5 offers excellent value for money. Add air-conditioning, a top-of-the-line electronics package, Genset and all the other luxuries that turn this top boat into a great boat and you’ll need around $910,000 to park one at the marina. But considering all the innovations incorporated into this boat and her excellent sea-keeping abilities, it still equates to top value boating.

A BRIEF HISTORY
Sealine has been designing and building boats for more than 30 years. It was founded in 1972 by Tom Murrant, who started out with nothing but the belief that he could make a boat better than those available on the market at that time.

Despite the company’s overwhelming success and expansion over the years, Sealine remains at its original location in the West Midlands, England’s industrial heart. People passionate about boating run the company. Staff are highly skilled, experienced boat builders and some have been employed since the first Sealine cruiser, the 23ft ‘Continental’, was born.

Boasting a workforce of more than 700, Sealine employees are specialists in their respective ields, which includes everything from mould-making to wood/metal work, upholstery, lamination and interior design.

ENGINE ROOM
A pair of Cummins QSC 500hp diesels provide the power for the Sealine 42/5.

PERFORMANCE
With four adults and a full load onboard the F42/5 returned the following performance figures.