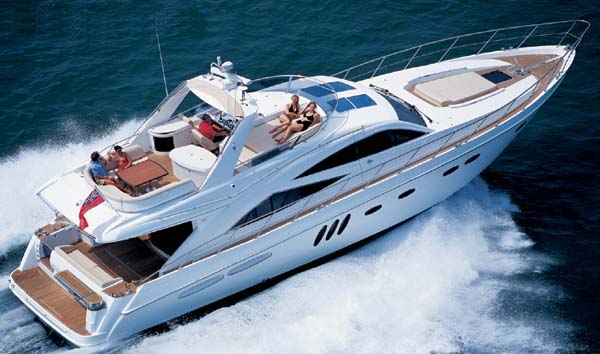 DARE TO DREAM – This ultra-luxurious 60-footer is the stuff dreams are made of.

More than 30 years ago boating enthusiast, Tom Murrant, started building boats in West Midlands, smack bang in the middle of England. Who’d have believed back then that this small boat builder could construct an empire that would become one of Europe’s largest production luxury boat builders, producing more than 400 boats a year ? Its range encompasses 15 models of sports cruisers and motor yachts, from entry-level to full-blown luxury 60ft motor yachts.

Despite the company’s overwhelming success and expansion over the years, Sealine has remain true to its roots by retaining the bold, entrepreneurial spirit that started it all, along with its original location in the West Midlands, the industrial heart of England. That’s quite a way from the sea, but it doesn’t seem to worry Sealine. The company trucks each of its vessels to the coast for sea trials, brings them back to the Midlands for a final touch up, them trucks them back to the coast for shipment. “The system’s worked for 30 years, so why change now ?” asks Tom.

The company now boasts a workforce of more than 700, who complete every facet of the boat building process from its original design, through to mould-making, wood and metal working, upholstery, lamination, interior design and naval architecture. In fact, Sealine is one of the few boat builders that run an entirely in-house operation ? from the drawing board through to the finished product.

Sealine has a worldwide network of more than 40 dealers, including Peter Redford’s Sydney-based Five Star Motor Cruisers, which not only sell these top boats, but offer an extensive backup and warranty service. But having now tested two of these boats in recent months, experiencing first-hand the build quality of each vessel, I doubt the Five Star team will have many warranty claims to deal with.

From the Modern Boating team’s point of view, innovation is the key to the overwhelming success of Sealine’s flagship, the latest T60 model.

INNOVATION’S THE KEY
This boat is packed with clever design improvements that truly enhance the onboard experience. These can be as simple as knobs, not cords, to open and close the Venetian blinds, or clever bunk designs that turn a twin guest’s cabin into a bunk house for four, when more than the expected visitors stay onboard. This cabin is also great for when the kids want a couple of mates to come along on a weekend cruise.

But to my mind the coup de grace is Sealine’s patented Extending Cockpit System. Electronically sliding the transom lounge and bulkhead out over the swim platform by around a metre, creates one of the biggest aft cockpits on any 60ft – flybridge cruiser on the market. If you like a party, this is the boat for you.

On boats, innovation and storage go hand-in-hand and the T60 is a glowing example of the excellent use of all available space, right down to the roof above the aft cockpit, which is an extension of the flybridge. Again, it’s only a simple thing, but lockers have been incorporated into the underside of this roof, which makes it an ideal location to store the life jackets in. If you had to abandon ship it would probably be done over the stern and everyone could grab a jacket on the way out, so to speak.

Production boats sold right around the world need to be able to accommodate individual taste without having to go down the more expensive custom-built path. I for one, don’t like air-conditioning on a boat and much prefer fresh air, but most American buyers wouldn’t even consider a boat without air-con.

So, to placate all, while the boat does come with three-section air-conditioning, it also has four electrically operated windows in the saloon, two near the helm area and another two aft near the galley and dining table. Sections of the roof above driver and navigator also open and there’s even a handy skipper’s door on the starboard side. Plus, all the cabins and bathrooms have opening portholes, so this boat has excellent airflow and ventilation for people like me.

Suffice to say, the standard of workmanship and quality of fixtures and fittings used during the T60 construction are all first class. Step aboard and you’ll be convinced you’re on a much larger vessel than a 60-footer. An open L-shaped galley (with bar) and the dining area, with its handcrafted dining table, are on the lower level aft of the main saloon. Step up into the saloon proper and circular lounges surround the pop-up plasma television behind the dual helm seat. This arrangement allows up to eight people to relax in comfort and enjoy the surround sound cinema.

The skipper’s also well catered for with a helm that features just about every electronic gizmo, allowing him to not only drive but monitor every operational process happening onboard.

You want luxury ? Stunning woods, including madrona bur, zebra ebony and pear (all with a high-gloss finish), plush leathers, deep-pile carpets, stainless steel, mirrors and subtle lighting are used throughout this vessel to create an ambience that’ll take your breath away.

Descend the stairs to the owner’s cabin where Sealine offers a luxurious full-beam master stateroom amidships, normally only found in much larger yachts, with its own spacious en-suite. And the beauty of an amidships owner’s cabin is you won’t be annoyed all night by the sound of water slapping the bow when at anchor. The VIP forward stateroom is equally luxurious and boasts its own en-suite.

The stairs to the flybridge are well protected from the elements and easily alighted by anyone carrying drinks. Not that you would have to take most drinks up, because the area has its own wet-bar and icemaker. The flybridge covers more than half of the boat’s entire area, so it is, in fact, a fourth story.

Large sun pads, plenty of seating tables, barbeque, and a bimini to keep the sun off, this is the place to party and the skipper doesn’t have to feel left out.

OVERALL
Concerned about manoeuvring a boat of this size around the marina ? Forget it. Twin Disc electronic controls and bow and stern thrusters make this boat as easy to drive as a 20-footer. It’s an ideal vessel for a husband and wife team.

The Sealine T60 Flybridge is one of the most innovative boats to hit Aussie shores since her smaller sister vessel, the F42/45, landed in early 2006. With a starting price of around $2.24 million, she’s also excellent value for money for a 60-footer.

The turning circle is similar to other vessels in her class, but she feels light and agile. Weighing-in at around 30,000kg fully loaded and boasting an extra-thick and strong fiberglass hull, she rides smoothly without banging and crashing her way across chop. The hull also performs with minimal pitch and rolling motions, while the trim tabs can counter any load or strong wind across the bow problems.

Twin 805hp Caterpillar C15 diesels drive the T60. These have plenty of power to lift the boat steadily out of the hole until the turbos kick in and she’s away. She cruises effortlessly at 20 knots pulling 1800rpm, has a fast cruise speed of 24 knots at 2000rpm and tops out at around 30 knots at 2380rpm.

PERFORMANCE
In calm conditions the T60 returned the following figures.

+ Excellent value for money; Extending transom
– Nothing to report