Seven Month Boating Epic a Feast for the Senses 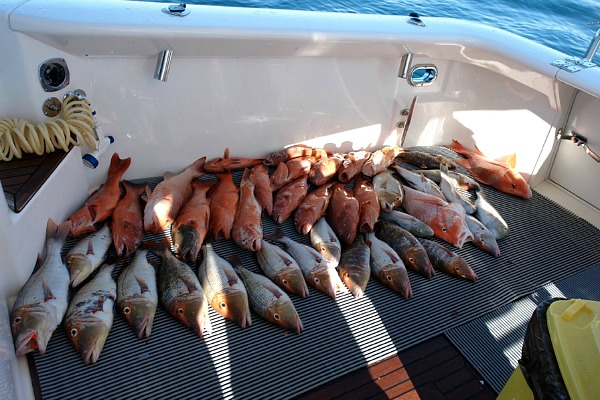 Avid Queensland boaties and fishos Tina and Hugh Bletchley have just returned from an epic seven month odyssey on their Maritimo 500 Offshore Convertible where they caught so many mud crabs they adopted a system of painting the day-caught number on the shell of each crustacean so they ‘didn’t pass their use by date’.

The couple from Raby Bay have just returned from a trip cruising the Queensland coast on their Maritimo 500 Offshore called Inya Dreams which would be the lifetime dream of many a boat owner.

“We left on March 17 and we arrived home on September 25 and we loved every minute of it,” said Hugh.

“The boat performed brilliantly in all sorts of conditions and the fishing and crabbing was absolutely brilliant.

“We lived on Coral Trout and Red Emperor and of course plenty of mud crabs.

“If you flush them out with salt water three times a day and keep them under a damp hessian bag they will last for 10 days, so we number them to make sure we eat the right ones first.

“We even caught tiger prawns while anchored at Roonies Point north of  Kingfisher Bay.”

Hugh and Tina took delivery of their Maritimo 500 in July 2011 having looked at a variety of different makes and models.  The couple had notched up 5000 hours in their previous vessel, a 38 foot timber boat, designed in New Zealand and built at Cleveland on Brisbane’s bay side.

“We had been looking for four or five years and our friends use to joke when Hugh said he was going to buy a new boat saying it would never happen,” said Tina.

“We settled on the Maritimo because it basically offered everything we had always wanted, including wider than normal  walkways to the front deck, and it was streets ahead in terms of sheer volume and quality.

“I did all the interior fit out with bed linen and cushions and the like and Hugh concentrated on things like up specing  the refrigeration, replacing the anchor and chain with heavier gear, adding  lights and navigation instruments and that sort of thing.” Tina said

The couple’s recent cruise took them from their home in Raby Bay to Port Douglas and they notched up more than 500 hours running time. In the 12 months they have owned their boat they have now notched up 682 hours which would probably be a record for any Maritimo.

Cruising at eight knots Inya Dreams uses 30 litres per hour in total while dropping to 7.5 knots reduces fuel burn to 22 litres an hour.

“I like to leave early in the morning and get to where I am headed well before nightfall,” said Hugh.

“And the secret to this type of cruising is that if the weather turns really bad we just sit and wait, it is pointless putting yourself, your crew and your boat in any danger by taking off when things are ugly.”

He said the Maritimo handled all the conditions they encountered perfectly. “We had been at Lady Musgrave for about five days getting belted and decided we would make for Pancake Creek,” he said.

“The weather  in Lady Musgrave Lagoon was pretty ordinary and it was even a battle to make it to shore in the tender so we though it was time to make a move.

“The winds were up at about 35 knots, but we pushed her up to about 25 knots and she just rode through the waves and swells.

“It was hitting us side on so we could cut through the sea diagonally and she handled it brilliantly. The boat didn’t miss a beat the whole time.”

Hugh said the biggest fish he caught was a mackerel which was well over a metre long and he lost count of the Coral Trout and Red Emperor that found their way onto the deck in Inya Dream’s cockpit.

The couple said preparation and having the right gear were the secrets to successful, safe and happy cruising. “We saw a lot of boaties who were ill equipped, and they get by when it is only five to 10 knots, but when the weather turns they are in trouble,” said Hugh.

“Small things like having sufficient anchor chain and the right size chain and anchor for your boat is what matters when conditions  turns bad.

“That and also planning ahead and taking into account the surrounding conditions, tides and location.”

“Making sure that you are not too restricted to a time table is also a big factor.”

He said the couple have previously cruised  to Grafton for the Jacaranda Festival and also use their boat in and around Moreton Bay.  They are planning the same trip again next year, maybe not quite so long, and would be happy to have fellow minded Maritimo owners come along for the experience.

“Our son Gordon , who joined us for a couple of weeks on the recent trip, runs our business so we have the capacity to go away when ever we like and we would  be happy to have other people tag along,” he said.

“We met quite a few fellow Maritimo owners at various spots along the coast and it was good to catch up to them and exchange stories.

“Tina flew home about three times from various ports during this year’s trip so people considering such an adventure have options.

“Life’s good and the cruising lifestyle is as good as it gets.”