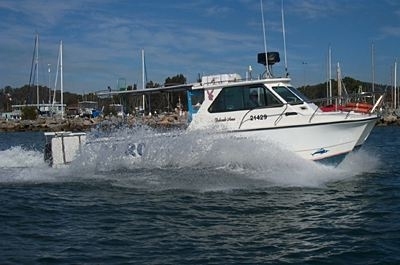 From the north-east the 20-knot seabreeze has been blowing for days, building a strong swell and chop. Out through the heads burst three of the world’s great maxi yachts, 80-footers, charging hard at 10 knots and more, lee rails underwater, spray flying to the spreaders, literally blasting their way upwind into the choppy seas. The power these boats generate is a tangible thing, as tangible as a big MerCruiser with open exhausts, or a V12 MTU diesel with several thousand horsepower, but more relentless, more miraculous because it is generated by the wind. One by one the spectator powerboats find the seas too much to handle and drop back, first the runabouts, then the cruisers, until only one boat is pacing it with the big yachts.

The Shark Cat 18, nose trimmed high, is dancing from crest to crest at a steady 15 knots, because to keep up with these great yachts in these seas you need many more knots than the sailboats are reading on their instruments. The photographs have been taken (for this is the purpose of the outing) and the Shark Cat turns for shore. Easing down-sea at an easy 20 knots, the boat catches the big swells from behind, drifts over the crests then falls through the air down the long, gently-sloping faces of the swells until one of the bows touches down, sinks for a moment as it gathers the full weight, then rises. The boat flows forward towards the harbour.

The driver has long ceased envying the maxi-boat crews, and for a short time the Gods of wind and sea, Man and boats are in harmony. Excuse the purple prose. Although many Shark Cat 18-footers were bought for recreational purposes, the bulk of the 23s were commercial craft used for fishing in all its many forms. As motherships for recreational divers or abalone hunters, as supply boats, short-haul ferries, they were even stripped down and used as offshore race boats.

The 23’s are unclassifiable. Over the years they were built with a huge variety of deck configurations and power units, with outboards of all sizes, twin or single inboards. Because so many were sold as commercial craft, to rate them as classics in a consumer magazine may seem a bit off the beam as relatively few were sold to people who could be classified as recreational boatowners.

The story goes that in 1962 Bruce “Sharky” Harris won the contract for meshing sharks off the beaches of Queensland’s Gold Coast, working from Southport. As a resident of the Gold Coast he was familiar with the Quickcats sailing in the surf at Kirra Beach, at Coolangatta, an Aussie icon years before Hobie cats were thought of. So in the late-’60s, when Bruce decided to build a small boat as a Christmas present for his father-in-law, he figured he could do worse than adapt the catamaran configuration as a powerboat. The Christmas present turned out to be 16ft long and 8ft wide, for the simple reason that in those pre-metric days plywood sheets were 8ft by 4ft.

Bruce mounted a 5hp Johnson outboard in a pod on the centreline about 600mm forward of the transom. He measured his mother-in-law for width and put a door in the hull side that she could fit through. The boat took four days to build.

One day Bruce’s trawler broke down and a friend suggested he take out the plywood cat. Bruce was doubtful so the friend brought along his 5-metre tinnie, just in case, but the Christmas present worked so well it set in motion a momentous chain of events. Bruce decided to build a catamaran workboat for himself. He knew nothing about fibreglass construction so he wandered into a production boatbuilding factory to have a look and was promptly chased out. Instead, he read up on the subject in Popular Science magazine, then built a mould of Masonite and popped out a fibreglass 17-footer which was “pretty rough”, to quote the builder. The year was 1969.

That boat became known on the coast as “the shark cat” and the name stuck. Then Harbours and Marine asked for one for survey work, so Bruce built one. Then someone else ordered one. When he sold the company in 1978 Shark Cat’s 42 employees built 300 boats in three models – the 23-footer, the 20, and the 18. The 23 and the 18, particularly, became classics.

After Bruce, the company had a number of owners and its fortunes ebbed and flowed over the next 12 years or so. Each owner left his mark – one was noted for improving the finish and trim, another introduced Kevlar construction. And all the while the competition increased. Two years after he sold the company Bruce Harris started building craft that were conceptually light years removed from the Shark Cat. He came up with the Cuddles series of displacement cruisers, first the 30 and then the 35, and this new business he reckons was much more successful than the first, perhaps because he tapped into the early days of the charter boom.

This time, Bruce concentrated on refining the production process of boat construction, so that the engine was mounted in a completed hull before the deck went on. Today he runs the slipway at Coomera, north of the Gold Coast, and is looking to retirement. His near neighbours include Riviera and Quintrex and he has a lot of respect for the boats they build, and the way they build them.

The Shark Cat story ended (nominally) with Wayne Hennig who once upon a time ran a marine and automotive workshop in Nambour, behind Queensland’s Sunshine Coast. Wayne also held a professional fishing licence and he bought himself an aluminium cat to work the shores of Fraser Island. In 1987 he bought a Shark Cat moulding, fitted it out and sold it on. Then someone approached him to build another, in a manner reminiscent of Bruce Harris’s experiences almost 20 years earlier.

By 1990 Wayne was a Shark Cat dealer, buying bare hulls for custom fitouts, adding engine pods, whatever work was ordered. When they came on the market he bought the moulds of the five Shark Cat models – 5-metre, 5.6-metre, 6-metre, 7-metre and 8-metre. His first change was to improve the interiors, as they were still flowcoat and speckle finish. He expected the boats to sell better to recreational users, but commercial buyers also approved of the better finish, particularly for charters.

The Shark Cat name has gone but the spirit lives on as Hennig’s company, Noosa Cat, builds cats with a huge variety of cabin/deck configurations at 11 basic lengths from 5- to 12-metres. The Noosa 7.8-metre, for example, has four deck options, and 10 have just been delivered to the NSW Police for the Olympics; five have cuddy cabs, five have small cabins. All have twin 200hp Yamahas and are good for 40 knots.

Over the years the Shark Cat company had a number of different owners and the boats were built in a bewildering number of configurations. A look at the classifieds reveals most of the boats on the second-hand market to be 18s and 23s, with a few 20s and a couple of the bigger models. The cheapest 18 I could find carried an asking price of $15,000, but the ONO alongside the figure suggested that haggling might get a result. This was a centre-console model with twin 90hp Mercury outboards, plenty of electronics and the usual gear, and the boat mounted on a trailer. I can’t vouch for the condition but it seems a lot of boat for the money, especially as it was not antifouled and had presumably always been trailed. This adds value to the motors, as on a moored early-model 18 the noses of the powerheads sit in the water when the engines are tilted.

Better value overall may be the ’92 model with pod mounts for the 90hp Yamahas, again with a lot of gear, at an asking price of $26,000. The cheapest 23 I could find was only $16,500, with 235hp Johnsons carrying a claimed 300 hours of use. A number of the 23s advertised were powered by single diesels, usually Volvos. These are mounted in the cockpit on the boat’s centreline and the sterndrive leg sticks down into the tunnel.

I tried one of these some years ago and could not fault it. You lose the cockpit space, but that would be a drama only in some commercial applications, as far as I can see. Asking prices for these were $33-35,000. Wayne Hennig is quite a fan of this set-up and builds a couple a year. He owns one himself for crab fishing and reckons the single diesel uses about the same fuel as one outboard. But by the time you add in all the savings (including diesel fuel rebate) running costs of the single diesel are about a quarter of two big outboards. For less performance, obviously. A huge percentage of boats listed are Queensland-based.

Shark Cats weren’t perfect. Some models draw fine spray from the back of the tunnel and suck it forward into the cockpit when heading upwind. Steering can be heavy and while they can be slow to respond to steering input at speed they are unbeatable at manoeuvring in tight quarters (eg when berthing) when splitting the throttles will spin them on their own axis.

For many people their only chance to ride on a Shark Cat will be when they are on a Queensland holiday and take a charter. They will marvel at the way the big boats lift on the cushion of air and spray which mixes in the tunnel as speed increases.

They will be staggered at the terrific ride in broken water and the way the hull arrogantly ignores seas conditions that would reduce a similar-length monohull to displacement speeds.

The Sharkies are classics because they wrote a huge page in the history of Australian boating. They owed nothing to what had gone before, an original concept which created its own genre. The name may have disappeared from the Australian market but their legacy will be with us forever.