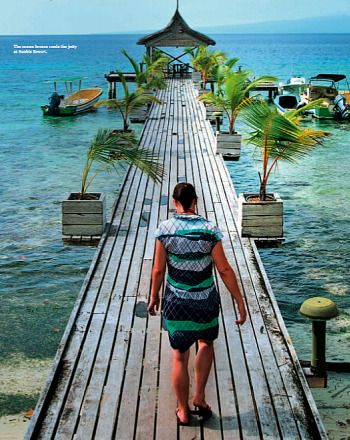 The teeming schools of fish make a kaleidoscopic light show.  Mantas, yellowfin tuna and a hundred other species cavort in the water, like characters in a spectacular aquatic stage play.

Solomon Airlines
Flies from Brisbane to Honiara on Tuesdays, Fridays and Sundays and connects from Honiara to Gizo and Munda.
www.flysolomons.com

Within the country, Solomon Airlines flies everywhere at low prices.

In the Marau Sound of Guadalcanal Island, it is unquestionably the Solomon Islands’ most exclusive retreat.  But with the closure of Marau Airfield on Guadalcanal, the only access is by a 150-minute speedboat trip.

Naru Island Resort: As an opening special, rent the whole island (including staff) for A$500 a day.  Book through Gizo Hotel (see above).

Solomon Connect: Offers boat charters out of Honiara and Gizo, with three boats currently based at Sanbis Resort near Gizo town—including a new 8m Yamaha Southwind with twin 100hp four-stroke outboards, satellite phone and GPS, and a range of up to 210 nautical miles (about 400km).  Call +677 60646.

The sheer variety and density of marine life stuns most visitors to the Solomon Islands.  The waterfront markets overflow with giant bonito, mackerel and kingfish—just a few of the myriad varieties that turn the stalls into a visual feast without peer.  It’s then just a short step to the buffet tables of the country’s many good hotels and resorts, where a plate groaning with crayfish and giant mud crabs will make just a minuscule dent in the budget.

But sadly, the gods do not appear to have been kind to the Solomon Islands over the last few years.  Just as the country was recovering from a long civil war that lasted from 1999 to 2003, it was hit by a devastating earthquake and tsunami in 2007.  Any other nation would be down for the count after such a series of body blows, but the Solomon Islands are now picking themselves up and asking, “Where to next?”

The world’s third largest archipelago, the Solomons cover a huge area, stretching nearly 2000km from the Shortland Islands in the northwest to Tikopia and Anuta Islands in the southeast.  Currently, most travellers make a beeline for Western Province, in particular Gizo Island and the Vonovono and Marovo Lagoons.  Here the marine life is at its best, and accommodation choices are more varied.  Western Province also has the greatest number of boat marinas, moorings and facilities for visiting yachts.

I visited the Solomons to see what a select few cognoscenti have long been raving about.  The country’s snorkelling and dive sites are world-famous; fishing and surfing opportunities abound; the cultures are kaleidoscopically diverse; and the people warm and friendly.  Yet tourist arrivals in the Solomons amount to fewer than 5,000 a year—a mere drip in the world tourism bucket.  Why?  Clearly, the message that the Solomons are now safe and beckoning has yet to get out.

Ivan Maeke, the highly articulate chairman of the Western Solomons Tourist Association, has a finger right on the tourism pulse. “With all the troubles, many tourist operators lost hope,” he says, “but with the return of peace and a new and supportive government in place, tourism is on the upswing—if only as an alternative to unsustainable logging.

“In the islands there is a big push to build eco-lodges,” says Maeke.  “This is a lot better for visitors than staying in big hotels where there is no interaction with locals—and in addition the benefits go straight to the families involved.”

Tourism as a replacement for logging is high on the government agenda.  The Solomon Islands economy grew by an unprecedented 10.3 percent in 2007, but this was largely due to income from logging—and reserves of timber are already severely depleted.  Furthermore, the denuding of the hills is causing turbulent runoff, which is muddying the otherwise crystal-clear water of the Solomons.  An alternative source of income must be found—and fast.

Tourism, particularly the construction of tourist lodges, is widely seen as an alternative to unsustainable logging.  A major benefit of eco-friendly lodges is in preventing runoff that would further damage the surrounding pristine marine environment.

But building a viable tourist industry is not helped by ongoing disputes over land-use.  I took a boat trip to Sagheraghi village on the northern tip of Gizo Island, where an eco-lodge was built despite the objections of some local landholders, only to be destroyed in the 2007 earthquake (which preceded the tsunami by just a few minutes).  The population of the village is largely of Gilbertese origin, from the low-lying nation of Kiribati, and for generations they used to live right on the seashore.  When the decision was made to move to the hills of Gizo Island to avoid further feared tsunamis, their lifestyles underwent a total upheaval.

With no cars, fishermen relocated to the hills now have to walk more than an hour each way to the coast.  Colourful gardens surround the hastily built, tarpaulin-draped houses that have risen in the hills, but the traditional ways of life have been shattered.  But local driver Jack has at least one redeeming perspective on the villagers’ plight. “now that people have moved to the hilltop, why not open the beach to tourists?” he says.

Back in Gizo town (not to be confused with Gizo Island), the Gizo Hotel makes a good base for exploring the surrounding islands.  Extraordinary wood-carving skills—creations from kerosene wood and black ebony, inlaid with mother-of-pearl—are on display throughout the hotel and its surrounds.  The elevated bar/restaurant attracts patrons from around the archipelago—as does the waterfront PT 109 Bar, five-minutes’ walk down the road. The PT Bar has a good marina attached, and is a welcome home to cruising boaties and other Gizo visitors.

A highlight of any visit to Western Province is Mbabanga Island, a 15-minute boat ride from Gizo Pier.  Mbabanga is home to two excellent resorts—Sanbis and Fatboys—and the azure waters surrounding the island give the merest tantalising hint of the aquatic treasures lying just offshore. Sanbis and Fatboys each boast a table that would grace the finest restaurants of Paris or Melbourne.

Sanbis chef Peter Wyatt, who hails from Singapore, boasts that he can cook more than 700 main course dishes.  A typical menu might consist of an entrée of tuna sashimi slices with wasabi, followed by baked kingfish fillets on a bed of rice.  Meals and home-made bread are cooked to perfection in a woodfired oven, and the flavours ooze with fullness.

Rainwater is collected in a tank—enough to water the gardens and for fresh drinking water.

“We aim to make Sanbis self-sustaining,” says Mergozzi.  “If we can stop soil erosion and minimise effluent from the resort, then the environment will not be harmed.”  Sanbis resort is also home to Solomon Connect, one of two main boat charter companies in the Solomons.  The other is Lalae Charters, operating out of Honiara.  For full details and contacts, see the ‘Getting Around’ fact box.

Fatboys, owned and managed by Grant and Turia Griffiths, is another top hangout, with a great “upper crustacean” menu.  You can stay in one of three restful bungalows—one of them perched right out over the water—and relax and do nothing, or everything.  From kayaking to snorkelling, diving and surfing, it’s all there.

I went snorkelling off the nearby Olasana Island, site of the epic rescue swim by John F. Kennedy during World War II. Kennedy Island, where JFK and 11 compatriots were marooned before Kennedy’s marathon swim for help, lies just offshore from Fatboys, and its contours breathe history.

But the very best snorkelling was to come later, just off Kundukundu Nomana Island.  Here, where a wall drops sheer away more than 1km to the ocean floor, the iridescent colours of the swarms of fish have to be seen to be believed. Kundukundu Nomana is in the Vonavona Lagoon, offshore from the brand-new naru Island resort on Naru Island, last leg of JFK’s epic swim.

After these peak experiences, it was time to unwind at Zipolo Habu resort, a low-key place on Lola Island, where Joe and Lisa Entrikin welcome fishers and wannabe fishers from across the planet.

Once again, the bill of fare cannot be faulted—and the bill of booze is pretty good, too.  Moored within swimming distance of the jetty, while its crew enjoys the facilities and laid-back ambience of the resort, is the yacht Katouska.  It has sailed here all the way from Venezuela in South America.

It’s hard to leave Zipolo Habu, but a 20-minute, high-speed boat ride takes us kicking and screaming to Munda jetty—surely the world’s only ferry wharf within easy walking distance of an airport—for the trip back to Honiara.

The last word comes from a Sydney visitor to the Solomon Islands.  “I’ve never seen such clear water and so many uninhabited islands,” she says. “And while not all the accommodations are five-star, the place is so clean and the people so friendly that you want to come back again and again.”

After this, what more could anyone say?