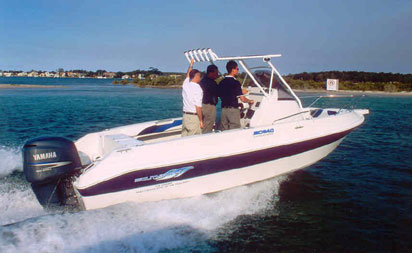 What do you do if you work for one of the countries biggest boat builders and need a purpose-build vessel for the factory fishing team ? That’s an easy one. Look at the range, scrap the lot, choose a top bluewater hull and roll your own.

The guys at Southwind freely admit the latest SC640 model, was never intended to be a production boat ? it just evolved. Southwind staffers put the model together after compiling a personal fishing boat wish list. And it turned out that their ideas of what constitutes a top fishing platform were shared by a lot of other offshore anglers.

The original Southwind SF640, which the new boat is built around, won a Modern Boating Boat of The Year Award on its initial release. But while the SF640 was an excellent fishing boat, because it’s a cuddy cabin, there was always a slight trade off in fishing space. The SC model addresses this with a centre cabin that allows 360 degrees fishing access.

This new model enlists, what Southwind have termed, the maxi console, or even a small wheelhouse, approach. But while the cabin is large enough to house a sleeping area, the test boat was fitted with two narrow bench seats. These were wide enough to accommodate three to four adults, but were way to narrow to be useful if you were trying to grab 40 winks. But the narrow bunks did allow a Porta Potti to be fitted, which added a more family fishing boat flavour to this vessel.

Headroom within the cabin was ample when seated, thanks to the deep well in the cabin, but that same deep well also made entering the cabin a little awkward, because you had to step down in the crouched position to get inside.

Cabin access to the foredeck area can be had through a seat forward of the console with a cushion and base that double as a hatch. There’s also deeply padded bolsters on the forward and side coaming, which help make fighting a big fish all the way around the boat easier for an angler. Plenty of room has been left around the sides of the centre cabin, which makes moving around the boat a lot easier.

A sturdy bowrail extends all the way back to the helm station, while both the bowsprit and fairlead are well designed and sturdy. At first glance the anchor locker looks a little pokey, but it’s cavernous and holds plenty of anchor rope and chain.

Moving back into the main cockpit, the dash allows the flush mounting of a sounder/GPS Chartplotter unit and radio and features Yamaha’s excellent three-gauge engine management system. This includes monitoring fuel flow so long range trips can now be accurately planned. The helm is positioned for driving from the standing position and, as such, there are no seats for the driver and navigator, she’s a pure fishing platform. A high, wrap-around windscreen and a bimini top, which features a six-rod rocket launcher-styled rod rack, shelter this area.

Under the cockpit floor is a 235lt fuel tank, while extending two thirds of the way across the transom is a fold down lounge. This can be lifted out and left at home if not required. In the top of the transom are two bait wells and there’s a small slide out transom door on the starboard side to aid boarding. But it’s at the back of this boat that her coup de grace sits a superb Yamaha 200hp four-stroke outboard.

Walking down the marina towards the Southwind SC640, apart from the boat’s stylish lines, it was the motor that grabbed the team’s collective attention. Our Queensland correspondent Steptoe is the only person in the Modern Boating test team that has had the chance to trial this new motor, so this test was going to be special. The only problem was there were 20 other boating journos there on the day and they all wanted to spend time in this latest offering.

The first thing the team noticed was the engine noise, or lack of it. At idle the only sign that this engine was actually running was the tell tail waterspout coming from under the cowling. It was virtually silent.

Pulling away from the jetty we accelerated smoothly up to 50kph at three quarter throttle while pulling 4000rpm. At this comfortable cruise speed the engine purred along and even soft conversation was possible.

From anywhere in the rev range, pushing the throttle forward had the team hanging on as the acceleration pushed us backwards. Yes, this 200hp is a big motor, but it’s a four-stroke and four-strokes aren’t supposed to have this kind of grunt ? wrong. She had plenty of power, but a quick check of the fuel flow meter proved that the only thing she didn’t have similar to a two-stroke was a thirst for fuel. At 4000rpm the new engine drank 28lt per hour and only 21lt per hour at 3500rpm while doing 40kph. They’re excellent figures.

This new 200hp Yamaha four-stroke can be summed up in three simple words, smooth, quiet and powerful.

This test was conducted on Lake Macquarie, near Swansea, on quite a blustery day. The lake was extremely choppy, but even flat-out the Southwind hull ate the conditions. Sure, there was a certain amount of banging running into the wind, but any hull would bang a bit when driven at wide open throttle in those conditions.

With the wind at our backs the deep-vee hull sliced through the chop cleanly and delivered a soft, stable and surprisingly dry ride, something that’s virtually unheard of in a centre cabin/console boat.

At rest the hull proved to be a stable platform to fish from. Weight shifts caused by people moving around the boat had little effect of the boat’s stability. With three people all on one side, as would normally be the case when gaffing a big fish, angler, wireman and gaff man, hull list was minimal. So we can add security to our list of pluses for this boat.

All in all, if you’re in the market for a purposed-built, bluewater fishing platform the Southwind SC640 Centre Cabin might be just what you’re looking for. She’s a no nonsense fishing machine that retains Southwind’s renowned build quality, has a stack of usable cockpit space, lets an angler fish 360 degrees around the entire boat, boast a dunny, has a cabin to shelter in, but best of all has a quiet, yet powerful, fuel miserly 200hp Yamaha pinned to her tail end.

This is an excellent power to hull weight combination that rockets the boat onto the plane, has more grunt than many similar two-stroke engines that delivers quiet, smoke-free and super smooth operation.

To park one of these boats on your front lawn will set you back around the $60,000 mark.

A quick check of the Yamaha engine management fuel flow meter proved that the only thing this motor doesn’t have in similar to a two-stroke was a thirst for fuel. At 4000rpm the new engine drank 28lt per hour and only 21lt per hour at 3500rpm while doing 40kph.