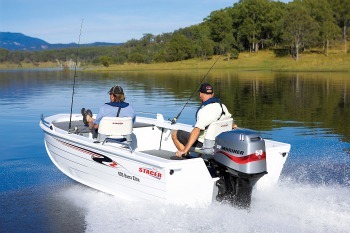 When it comes to fishing boats there’s a case to be argued for keeping things simple. Especially when it comes to issues such as should I spend more bucks to get remote steering, a bigger motor and a better riding hull ? Or should I go for a simpler/cheaper, boat/motor and put the dollars into tackle, an electric motor and a top-of-the-line sounder ?

The two Stacer “Barra” boats tested here are a case in point. There’s little argument, given the extra dollars involved aren’t a problem, that the larger, more sophisticated (and obviously more expensive,) 435 Barra Elite is a more comfortable boat. But “better” is another question entirely.

The fact is a 435 Barra Elite is not going to catch you more fish than the smaller, simpler and less expensive 420 ProLine Angler.

Apart from the Elite’s extra 15cm of hull length, the most dramatic differences between the two hulls is that the 4.2m Stacer is what we all recognise as a basic barra-punt type hull. The 4.35m boat on the other hand has what Stacer call their EVO hull.

Stacer’s EVO hull has been stretch-formed to introduce a varying deadrise angle. This begins right at the bow where the entry is quite fine and carries through to the transom to form a distinct gull-wing shape at the transom.

On the day we tested both boats side by side at Jumpinpin, the differences in ride quality were obvious. The EVO hulled boat’s entry sliced the water easily, while the water deflected off the undersides of the hull was forced down to cushion the ride. Compared to the smaller boat it was a remarkably softer and drier ride.

So the EVO hull has a better ride, there’s no argument about that point, but do you need a better ride on the water you fish?

For reasonably sheltered water such as rivers and smaller lakes, the ride of the standard hulled boat is perfectly adequate.

Inside the two boats are similar. Both have raised casting decks forward and aft with a flat, uncluttered deck between.

There’s ample storage space under hatches in the space provided by raising the casting areas. The 420 has a single hatch across the bow with twin hatches behind that.

The 435 has a divided anchor well on a slightly higher level right in the bow, with a large single hatch aft of that. There’s a roto-moulded insert in both boats to deaden the noise of ground tackle banging against the metal hull.

Aft, the Barra Elite’s casting platform conceals a live-well and a fuel tank rack, the cheaper boat lacked this. Do you need a live-well ? I don’t, but some do.

The Stacer 435 Barra Elite was equipped with a 50lt underfloor fuel tank. That’s a pair of portable “tote” tanks under the aft casting deck in the other boat.

Both of the test boats here were fitted with electric start motors. But when you add a battery to the 420, you lose the ability to carry a second tank behind the helm seat. Is underfloor fuel and a tank twice the size of the average tote tank an advantage? For some, yes, but not for all.

In both cases pedestal-mounted bucket seats are fitted to the boats. However, the team had a minor criticism with both boats; the seating is mounted extremely low. Another difference is that the Barra Elite has a side console, while the ProLine Angler retains tiller steering.

It should be pointed out that the side console is an extra cost option in the Barra Elite model, which is also available with tiller steer.

If the intended usage involves driving long distances the option is a worthwhile one. Driving seated at a steering wheel is far more comfortable for extended periods than putting up with the relatively unnatural position imposed by tiller steering.

On the other hand, the writer for example doesn’t spend extended periods at the helm and does do lots of technical trolling work where the instantaneous and direct control of a tiller is a decisive asset.

The canopy fitted to the test 435 Barra Elite was not designed for serious fishing and it would be a nightmare to fish, or should I say try to fish, from a boat with this canopy on. People do fit them though, particularly in the north where you can never be too sun conscious these days. But surely it wouldn’t be difficult to fit a canopy that quickly folded down onto either the bow or stern casting platforms to keep it out of the way.

In terms of power, both boats were fitted with electric start four-strokes. A 50hp Honda on the 435 and a 40hp Yamaha on the 420. While both engines were exceptionally smooth, quiet power plants, there’s going to be a lot more dollars left in the kitty by opting for a cheaper motor in either case.

To put that into the correct perspective a basic 420 ProLine Angler, set out like the test boat and powered by a pull start 25hp will come in at around $9,000. Adding a four-stroke could add the best part of another couple of grand to that. An electric motor and a quality sounder another couple.

But at $14,000 we’re still under low end bidding for a Barra Elite, which begins in the low 15s. At 18 to 19 grand, a 435 Barra Elite tricked out like our test boat about doubles the basic price for a 420 ProLine. And that’s without a sounder or electric. Somewhere between the two is where most of us would go. What an interesting choice!

Engine Room
The 420 with 40hp on its blunt end was a bit “toey”. We felt the hull would be better served by a 25 or 30hp motor. The Yamaha 40 was otherwise user friendly with power trim and tilt and a long tiller arm to tame the beast considerably.

We recorded a top speed of 28.5 knots, which doesn’t reflect how overpowered this boat felt. We were concerned that an inexperienced person might find it a little hard to handle. We had a few anxious moments ourselves until accustomed to how reactive the boat was.

The 50hp Honda on the other hand matched the 435 Barra Elite beautifully. Honda’s 50 has been around a long time and is a well tried and thoroughly proven performer.

By comparison to some of the 50 four-strokes around now, the Honda is compact and lightweight, partly because it is actually smaller than some both physically and in capacity.

Although in some opinions it lacks the outright grunt of some of the later generation 50 four-strokes, on this hull it was as sweet as a nut and produced a top speed of 28 knots.