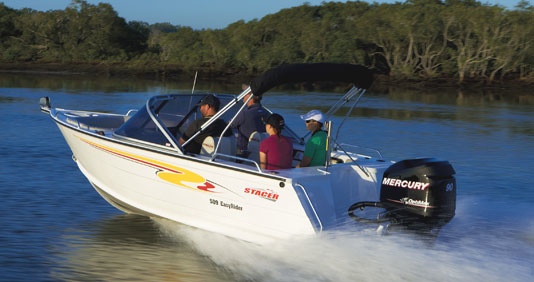 The introduction by Quintrex of their Freedom Sport models, a sporty bowrider that quickly converts into a lure/fly-casting platform, had a profound effect on the boating industry, if the number of its imitators is any measure to judge by. And Quintrex’s sister company Stacer’s EasyRider line also follow the Freedom Sport concept.

Stacer are going to scowl at us for mentioning Quintrex and Stacer in the same boat test, but the facts are that the two brands belong to the same parent company. And there’s no denying the often-evident cross pollination between the two.

There are obvious similarities and it’s ridiculous to try and turn a blind eye to them. But at the same time, Stacer do remain an entirely separate identity within the parent company and their boats do tend to have a quite different character. Far from being just a re-badged Quintrex, the Stacer EasyRiders should get due recognition for their own merits.

They are hulls like Stacer used to have before they introduced EVO and the hulls most of their competitors still have. In the market sector Stacer occupy, the EVO Hull alone makes them standout. The EVO Hull is a noticeable and definite improvement over its peers, with the singular exception of the more sophisticated (and generally more expensive) Quintrex Millennium Hull. We tested the Easy Rider in the Jumpinpin area between Brisbane and the Gold Coast, where it handled a fairly unfriendly day without any fuss at all.

Over a moderate wind chop, its ride was indeed remarkably soft and dry. At the time we were using another Stacer, a model without the EVO Hull, in other words a hull very similar to its competitors, as a camera platform and the lack of bumps, bangs and spray in the EVO version quickly proved very evident.

Put a couple of friends on the aft lounge, or in the bowrider seats, and head off for a day’s cruising about and the 475 EasyRider is a dry, comfy vessel. It’s completely at home on big estuaries and reasonably sheltered bays, which is where most boating is done around here.

It’s no ski racer, but she will stand a bit of throwing about towing wake toys and so on. Smelly old fishos (their Macrae and Steptoe’s mates) might want to go fishing, but fishermen don’t rule the world, I must admit, however begrudgingly, that there’s more fun to be had in a boat than just fishing out of it.

In a proverbial nutshell, this is exactly why the Freedom Sport concept is the runaway success that it is. And after a few hours in it, we’re happy to report that a Stacer 475 EasyRider is an excellent rendition of the theme. As a cruise about family fun boat it handles like precious few aluminium hulls ever have and as a fishing boat, it also deserves an even closer look.

For those who have been asleep for the past few years, like the Freedom Sport, the 475 EasyRider’s bow seating lifts out and an infill drops into place to convert the area forward of the windscreen into a casting deck. There’s also an aft lounge, which can be removed from the boat and left at home to convert the cockpit into a fairly serviceable fishing workshop.

The backrest cushions in both bow and stern lounges are a little rudimentary although they are there, unlike some of her competitors. On the other hand the backrests don’t get in the way at all when the lounges are at home in the garage and the boat is in full on fishing mode.

Seating immediately behind the windscreen for the driver and navigator is in a pair of well-upholstered bucket seats. There’s ample room to walk between them when moving around the boat. With the centre of the screen and the little door between the bow and centre section closed and with the (optional) canopy fitted the helm seating was quite well protected from the elements. Two people seated here are just aft of centre where their weight is most beneficial, or more correctly has the least negative effects. However you describe it, it’s a good ride.

The canopy will be a very popular option in this boat, so much so it’s difficult to imagine anyone doing without one. It shades the cockpit effectively and can be folded up into a compact bundle amidships, although when fishing, it will get in the way. Four screws hold the canopy in place, so it only takes a few minutes to remove it work to leave it at home, so this need not be too much of a problem.

About the only thing we were less than impressed with about the cockpit was the standard type side pockets. We always comment about these, but the Stacer guys tell us their dealers insist on them. Stacer boats can be ordered without them if anyone out there agrees with us.

That tow bar seen on the aft covering board of our test boat is another interesting option. When not in use for towing, a very useful fishing bench drops into place and in keeping with the convertible concept at work here, converts it to a bait cutting board.

Another option the Modern Boating team would also take Stacer up on is the folding boarding ladder mounted out on the transom. Once folded down into place this makes getting into the water or onto a beach a breeze. The 475 EasyRider also has what Stacer call a Mod Pod transom. As you can see in our pics, this mounts the outboard aft of a full height bulkhead.

There are any number of positive effects of this arrangement including the way it supports the added weight of four-stroke motors and in the way it acts like a big built in trim tab. It is a full width motor pod extension of the bottom sheet. It increases the hull?s planing area and generally contributes to the boat?s level attitude when running and transiting from displacement speeds to planing.

To park a 475 EasyRider in your driveway will set you back around $24,990, which represents pretty good value for money.

Engine Room
It’s a fair bet that a lot of 475 EasyRiders are going to wear four-stroke motors. Fishos have adopted four-strokes like no other segment of boating. And as the various outboard companies present us with second generation four-strokes that are even better, even more people won’t be mixing oil with the fuel anymore. However, the test 475 EasyRider ran a traditional two-stroke (a 75hp Mercury) giving this boat plenty of sting in its tail.

Because the Stacer people are also the Quintrex people, we did hark back to a 475 Freedom Sport, powered by a 60hp four-stroke we tested some months back. It was a beautiful match to that (similar size and weight) hull and we all agreed it would serve equally as well on this one.

As we tested it, the 475 EasyRider/75hp two-stroke Mercury combination got out of the water very easily and (as you might expect with 75hp being the maximum power rating for this hull) ran quickly up to a top speed of 33.6 knots.

With impressive acceleration from zero to WOT and the low, legs stretched out, driving position behind a thick-rimmed wheel, this boat had a very “sports car” feel about it.