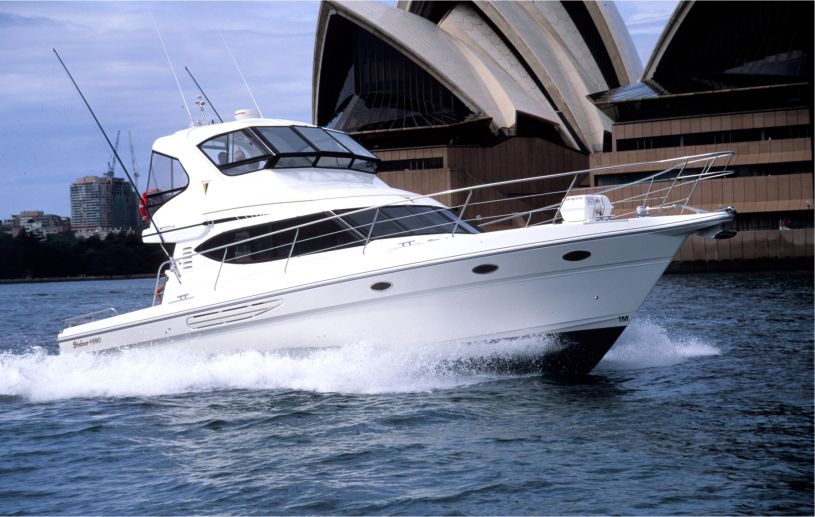 Ask anyone in the marine industry what images the name Steber conjures up and they will probably say things like “bloody Alan” Alan Steber owns Stebercraft and is one of the industries well-known characters, and bloody tough boats. In fact, they are more than just “bloody tough boats”.

All Steber boats are built to stringent survey standards. This boat, a 4380 Flybridge Cruiser, is rated to USL 2C (eight passengers and two crew a total of 10 persons) plus, 1D, which allows for 20 passengers and two crew. She’s destined for VIP corporate charters around Sydney, so I suppose you could call her a workboat.

But when she’s not fulfilling that role she’s a fully blown, game fishing vessel that will become a frequent sight at many of the tournaments around the traps.

Normally, when a boat is built to such stringent survey conditions they tend to look like, how to describe it, commercial workboats. A bit like an overgrown Sydney water taxi, with bits hanging off them at all levels. And yes, Steber have built hundreds of commercial vessels over the years, dive boats, pro fishing vessels, police and rescue launches and the likes without many of the frilly bits, but Top Notch is far from an ugly duckling, or Sydney water taxi for that matter.

This Steber’s a beautiful swan with all the goodies, but it’s still built like the proverbial brick …. house. Steber go to great lengths not to hide the various extra items that need to be added to a boat under survey – life rafts, life buoys, fire buckets and fire fighting systems, plagues and labels and the likes but to blend them tastefully into the vessel’s overall appearance.

They’re all readily at hand and easily identified, but don’t detract from the boat’s luxurious look. With a displacement of 16 tonnes this is one, solid, 43 footer, but out on the water she displayed sparkling performance powered by two superbly engineered Series 60, 700hp Detroit diesel engines. To say she had power to burn is an understatement. In reality, if any a new owner wants a top speed of around 27 knots and the ability to cruise all day at 20 knots; twin 450hp engines would suffice. But just as some people prefer a V8 ute over a six-cylinder version, the new owners of Top Notch wanted power. And power they got.

When they open this baby up everything else gets left in her wake. These are the first Detroit engines to be fitted to a Stebercraft and the guys from Detroit have worked extensively with Steber to get the engines set up perfectly. The new engines are six-cylinder, direct injection, inline four-cycle turbocharged diesels. The following rpm/power/speed-to-fuel usage figures are accurate and were supplied by the team at Detroit following extensive sea trials onboard Top Notch.

The EDM also retains historic diagnostic code information for the engine, transmission and control system, which can be recalled at any time. From the Modern Boating team’s perspective, the most noticeable thing about these new Detroit engines were diesel fumes, or should we say lack of exhaust fumes. DDEC-Electronic control system manages the combustion process for maximum output, fuel economy and low smoke. Out on the water, apart from the incredible power supplied by the 1400hp pushing her, the Steber 4380 proved herself to be a soft and dry riding hull that maintains the correct attitude without the need for trim tabs.

The thickness of the hull kept running noise to a minimum, while excellent engine room insulation and exhaust muffling allowed uninterrupted conversations anywhere onboard. Steber are renowned for the strength of its boat, but what about the interior design and levels of luxury ? Stepping from the teak marlin board onto the teak floor of the aft cockpit you are surrounded by open space. Even with the game in place there was plenty of room to move about, which is a prerequisite of any good game boat. There are storage lockers in the transom and gunwales, a wide transom door, hot/cold handheld shower, two rudder inspection hatches, two in floor lockers and a fully plumbed live bait tank. There are stainless steel grab rails surrounding the cockpit, six capped-rod holders and fibreglass outrigger poles.

There’s even television mounting bracket and jacks on the portside under the flybridge overhang. To port, up against the saloon bulkhead, is a moulded locker with sink and tap, while to starboard there’s a moulded fridge/freezer beneath the stainless steel flybridge ladder. And here lies the only problem I found with the whole vessel. This ladder above the fridge makes it difficult to open the lid. But once you get the lid open you can a grab a “coldie” to drink while you cook the evening Galley Mate 2000 BBQ. A high bowrail extends all the way back to the rear of the main cabin making the journey to the foredeck safe.

The anchor locker features a collision bulkhead and divider for a second anchor. There’s a freshwater hose, anchor winch and the chain is painted different colours every 10m. An emergency life raft is also sited on the bow for quick deployment. Enter the main saloon and all pretence about this being a workboat flies out the door. Beautiful blue upholstered lounges grace the main saloon, which are complimented by the pale blue carpets. The dining table can be swapped for a smaller drinks table to make more room in the saloon when the bigger table isn’t needed. The settee on the starboard side also converts into a single bunk. Tassie oak has been used for the joinery and because of its light colour adds a sense of openness to the saloon.

The U-shaped, fully featured galley allows the cook to remain part of the conversation, while the serving bar also acts as a handy wet bar. There is a 140lt fridge/ freezer in the galley and a second to port behind the lower helm station. Other features include a 15″ plasma TV, entertainment cabinet containing a DVD, VCR and CD stacker, brass-cased barometer and thermometer, all the little luxuries have been included. The luxurious vein of the main saloon is continued in the owner’s stateroom. There’s hanging lockers, mood lighting, reading lamps, TV, double island bed, dressing table and footlocker storage. In the guest’s cabin, there are two bunks, a lower double and a single upper. Other features include hanging lockers, mirrors, reading light and a 10.4″ TV in the cabin wall.

The bathroom features a fibreglass shower recess, electric toilet, vanity unit with single mixer tap, large mirror, all the required soap holders and the likes and a hinged acrylic shower screen door. Up on the flybridge everything is at the skipper’s fingertips, electronic controls Raymarine electronics package (GPS/Chartplotter, sounder autopilot etc.) and the excellent Detroit Diesel EDM system. Also mounted in the flybridge hardtop was a 10.4″ television monitor. In front of the island helm station, with its large recessed panel for electronics and control switches, are two side lounges, each capable of seating three people in comfort. The skipper’s and navigator’s seats are heavily padded buckets with footrests and handrails.

But now for the coup de grace. The windows surrounding the flybridge have sunshades with Velcro fasteners. This allows them to be quickly removed or replaced as required. It is an excellent idea the Modern Boating team is sure will probably be picked up by many other other boat builders. Yes, Top Notch was designed and built for corporate charter work and while she might be built as strong as a battle tank with reinforced bulkheads and the likes, but lacks nothing in the luxury fixtures and fittings stakes. The main cockpit, aft cockpit and flybridge can all be used as mini conference areas with their own TV monitors, so DVDs and video presentations can be viewed anywhere onboard. What better way to complete a stafftraining day than cruising Sydney Harbour.

Although the Harbour’s beautiful scenery may distract some staff. And when she’s not doing charters you can bet that excellent Relax LTD game chair will be getting a good workout as the Top Notch’s new owners battle some of our piscatorial speedsters. To park a magnificent Steber 4380 Flybridge at the marina will set you back less than a million dollars.