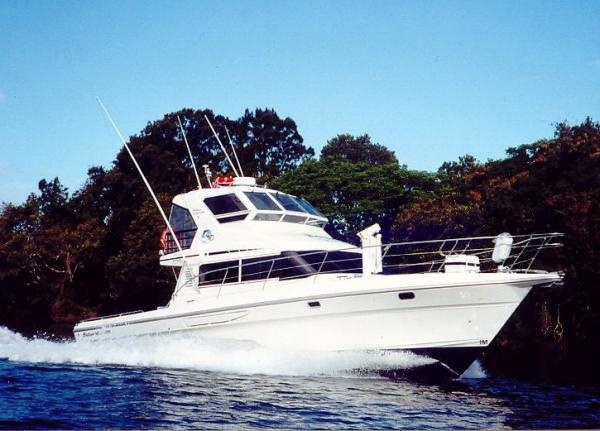 Builder Alan Steber kept noticing the same gameboat owner checking out his range at every Sydney boat show. The two got to chatting and finally, last year, Alan asked: “When are you going to buy one of my boats?”

The cockpit is 1.5 metres longer for a start, and this extra length makes for a very different boat. Suddenly you have the space to suit corporate charter, cruising, sports and game fishing or to simply set up an outdoor table and chairs. It has also added a vast amount of storage space under the cockpit floor.

But the most significant new feature of the Steber 4700 GTS is that it’s built to, and is in, full 2C/1E survey. Many manufacturers claim to “build to survey” but the Steber is constructed to USL Survey codes and is approved in 2C survey, allowing it to carry up to 10 people. Based in Sydney, this boat is to be used for VIP corporate Charters.

It wasn’t so long ago that a survey cruiser looked commercial. There were valves, signs, hatches, and various gizmos all over the boat, making it look more like a harbour ferry than a pleasure cruiser. In the Steber the safety features are still there, but they’re cleverly concealed and integrated.

0n face value the boat looks no different to any other recreational cruiser. Much of this is due to the ingenuity of the manufacturer, and its willingness to work with authorities. It has ensured not only greater market appeal but also a potentially higher resale value.

The 4700 has all the hallmark features of the 43 in the quality of the workmanship, attention to detail and the interior layout, though there are the subtle changes and upgrades since we first saw (and awarded) the 43 in the mid ’90s.

The twin cabin/twin bathroom layout provides quality accommodation for six people, while the saloon is well set out. The fitout can be customised, but overall the fairly conventional configuration of the test boat was appealing and practical. The light ash veneers and brightly coloured furnishings gave a light, airy and cheerful feeling.

The dinette lounge is aft, with the entertainment and bar facilities opposite and a U-shaped galley situated forward. The owner’s cabin (with en suite) is on the lower level, opposite the large shower/head compartment, while vee bunks fill the forepeak.

The fully enclosed flybridge station gives all-weather protection to the skipper and passengers, a real bonus on the test day when hot sunny weather turned black and nasty in the afternoon as a rainstorm swept Sydney.

Two swivel helm chairs sit behind the console, providing excellent vision forward and down into the cockpit. There are two lounges each side of the bridgedeck, and plenty of storage and space to move about.

It’s a smooth, easy riding hull that likes to push the bow wave well clear as it powers into a sea. It has the ability to maintain cruise speeds in reasonable swells without too much discomfort to passengers or stress to the boat.

With Stebers retaining the full moulded keel line that has been a feature of their hulls for decades, the 4700 turns smoothly and tracks quite positively in a following sea.

Something I’ve been unable to do for many a big boat test is get a hull to plane on one engine. The Steber 4700 didn’t ease onto the plane straight away, but as the 635hp Cummins built up power and revs, the hull gradually got going. It held planing attitude at a steady 12 knots/1750rpm with a following wind, and 11.8 knots (1850rpm) into the wind.

It’s a comforting thought that the trip home on one engine will be just that little faster. Even with one engine the hull proved reasonably manoeuvrable, having a satisfactory turning circle without washing off too much speed or bogging down under its own weight. It demonstrated just how efficiently this hull operates.

One of the problems with large horsepower engines is the constant need to drop in and out of gear to minimise speed in the marina or no wash zones. A slow idle function reduces engine speed by 50rpm below the programmed minimum of 600; it doesn’t sound a lot but those 50 revs can be helpful in confined spaces.

Engine synchronisation is done automatically allowing, at the touch of a button, one throttle to be used instead of both. In the event of an electronic malfunction in the primary throttle and gear system, the skipper does have remote manual throttles as a back up.

This complete electronic engine management system costs extra, naturally, but in the overall context of the boat package hardly produces a ripple in the bottom line. And it puts the finishing touches to a craft that represents the latest in construction and design thinking from one of Australia’s few remaining commercial and recreational big boat builders.

The 4700 may be cloned from the 43 but the style, construction and engineering are still at the forefront. The fitout and attention to detail is excellent and when it comes to engineering, Steber don’t take short cuts – pleasurecraft receive the same standard of engineering that goes into commercial boats.

Like all models there are a variety of engine options available, but Steber are so taken with the service support and performance of the Cummins that they are now recommended power for the 4700.

Engine Room
The GTS notation in the model name is an acronym for “Grand Tourer in Survey”, and the 4700 can indeed be classed as such. But its performance is also in keeping with the sporty connotations.

The Cummins were chosen by the owner, who has had years of experience with diesels in the trucking industry, as much for the service and parts back-up as outright performance.

In addition to the standard analogue instruments, electronic panels on the helm console monitor (and display) 13 critical engine functions, churning out such information as fuel flow, engine RPM and load, temperatures, hours and trip monitor.

An alarm system checks more than 20 potential fault codes every 20 milliseconds, alerting the skipper with both visual and audible warnings. By watching the engine loading and fuel consumption figures throughout the rpm range, the boat could be operated for maximum economy.

Much of our cruising down on Sydney Harbour and out through the Heads was at 1800rpm, at which we were using 70% of power and consuming 72 litres per hour (per engine) at 20 knots. At full power, this consumption rose to 124 litres per hour at 28 knots.

The 635s are more powerful than what we would’ve seen in boats of this size five to 10 years ago, brought on by the fact that diesels have become smaller and lighter, and owners are realising fuel economy benefits when motors aren’t overly worked.

Computer control and electronic technology has advanced engine development in huge leaps and bounds and the Cummins QSMIIs are superb examples.

The first thing I noted was the complete absence of black exhaust emission. Open the throttles wide from idle and there is no smoke, no waste and no soot on the water. Just a slight hesitation in power response and the hull is away, leaving a clean wake and clear air trailing behind.

That smoke/soot free operation is almost entirely attributed to the electronic management system which controls, balances and optimises fuel supply and combustion.

But the electronic management system has benefits far beyond that. It gives service technicians immediate diagnostic and prognostic data on engine performance as readily and quickly as plugging in a laptop computer. This isn’t new technology but it takes marine diesels into the new millennium.

With the Quantum system Cummins offers an optional cruise control system, unique to the marine market. This enables optimum cruise or any other preferred speed (such as trolling) to be programmed in, and at the touch of a button called up. The computer does the rest.

There are other benefits – it can operate as a built-in engine governor, whereby Dad can limit the engine RPM when the older children want to use the boat. Not fair, the kids scream!