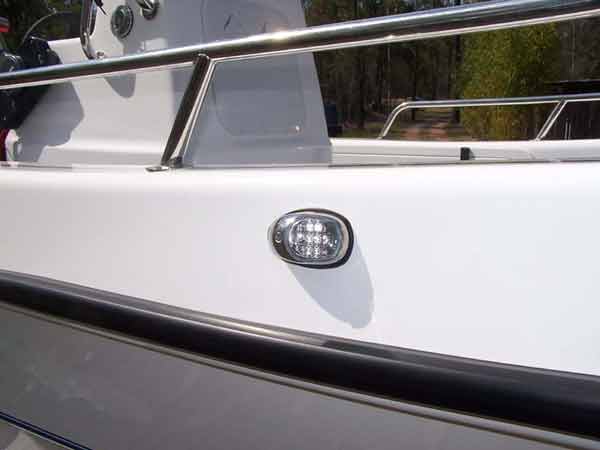 Here’s a new 5.8m vessel that takes longboat design and construction to a higher level.

A friend of mine asked me to find him the ideal boat for fly and lure fishing around Sydney Harbour. But it also had to handle the odd live-baiting expedition and some time on the water with the kids.

So I set about finding him the right boat, an unenviable task, yes, but I finally came up with the Stinger Rampage 580. Stinger Boats have been building fibreglass boats in Queensland for almost two decades.

And the company has established a good name for itself by producing smooth riding, all-weather, well-built boats that are just what we needed when operating on Sydney Harbour.

Stinger produces a range of purpose-built centre consoles that are great for this job with a layout that will suit all of Dave’s sportfishing needs.

The Stinger 580 is also renowned for only requiring low horsepower to perform effectively and being a great fishing platform. Better still, Stinger Boat’s representative, Murray Hallam, is more than willing to customise each boat to suit their customer’s needs, which is a refreshing change after dealing with some other boat builders of similar models.

In this instance we didn’t want a bowrail, because I feel they inhibit fishing ability too much. Instead I had a grab rail fitted on either side (for passengers to hang onto while underway) or installed three pop-up cleats. Ask any fly fisherman and they’ll tell you that nothing annoys them more than boat fittings like standard cleats that continually snag fly lines.

I also like the way that the Stinger’s anchor well lid conceals a heavy-duty mooring cleat, something I’d like to see on all boats.

Another option I chose was to lengthen the rod lockers on each side. The boat now has two lockable 10′ 6″ lockers that can hold three 10-ft fl y rods. These lockers can also hold spin rods, or the stack of gear that normally finds its way onboard.

ON THE WATER
On the water the Stinger is impressive. It handles chop and swell with ease and that big flair up front deflects the spray down and away from passengers.

Initially, I considered fitting a 100hp four-stroke outboard, but Murray advised me to go for one of the new 70hp Suzukis. This is a motor that’s received huge wraps throughout the industry. Murray said he had done tests with both motors on the 580 and both achieved similar speeds, but there is a clear weight-to-fuel economy difference using the 70hp Suzuki.

I was sceptical about the performance of such small horsepower on a boat of this size, but Murray was spot on. She ran out to a little over 30 knots and cruised effortlessly around 23-25 knots with good fuel economy.

Murray advised that trim tabs are a must-fit item on these boats, especially when fitted with heavier four-stroke motors. On the water the tabs work beautifully, controlling the ride and performance.

LAYOUT
From the stern to the bow, the Stinger 580 is a complete package with all the options you could desire in a sportfisher. I was impressed by the quality fittings, the construction and fit-out.

Little things make a big difference in my book. Things like a plumbed drain around every storage hatch lid ? making them true dry-storage areas ? are big winners for me. Having dry storage makes a world of difference and so does a self-draining deck, which is also standard on the Stinger.

There are hatches and lockers everywhere you look. These include tackle boxes, two bait wells in the transom (one is fully plumbed) and a huge locker beneath the forward casting platform.

The helm bench seat has a forward, or aft facing, padded backrest. Underneath this is a large icebox, which, like all the other storage areas, is plumbed to drain overboard, not in the boat.

OVERALL
Under the floor the Stinger is filled with foam buoyancy, so, even if the boat were filled with water up to the gunwales (almost impossible with a self-draining deck), she would still maintain positive buoyancy. That’s a comforting thought.

I found the Stinger 580 Rampage to be well built and meticulously fitted out with quality products.

The ride and performance was fantastic, the layout for sportfishing was perfect and the list of standard features and inclusions pleasantly surprising.

So how much will it cost you to park one of these top boats on your front lawn, around $29,950.

The distinctive Stinger good looks have been preserved, while adding loads of new features to the Stinger 580. The Stinger 580 has the same robust construction with positive foam flotation, which is standard on all Stingers.

On top of the new Stinger 580 standard equipment, it is possible to order a Stinger 580 with additions or subtractions to the standard layouts.

For example, buyers may wish to have a Stinger 580 S, but would like to add hydraulic steering and bowrail.

Stinger Boats are happy to quote on the addition or subtraction of items listed in its available options.

ENGINE ROOM
Initially, I wanted to fit a 100hp four-stroke outboard, but Murray advised me to go for one of the new 70hp Suzukis, a donk that’s received huge wraps throughout the industry.

PERFORMANCE
The Stinger Rampage 580 had a top speed of a little over 30 knots and cruised effortlessly around 23-25 knots, providing good fuel economy.