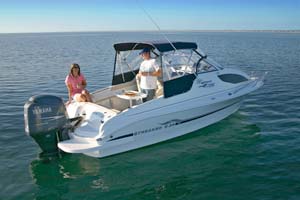 Hit the water, crank the tunes and pop the champagne, this boat loves a good party!

Anyone who loves boats will develop a soft spot for the pride and care that shows through in the Streaker 585 Sports Cruiser.

The 585 Sports Cruiser makes no bones about leaning toward cruising style boating rather than, say, fishing. For the softer side of fishing though, the kind that goes with ‘cruisy’ days on the water, the Streaker 585 Sports Cruiser is something special.

We’re lucky to have some of the best small boat builders in the world in this country. This boat is among the best of the locals, which is saying something in itself, and despite my lack of prior experience with the brand, the company is hardly new, having been around for more than 30 years and still in its original family hands.

Streaker boats come fully fitted out and that means fully. This boat has everything from a quality stereo system to pressurized fresh water to a sink and shower, tackle locker, table, full camper covers, the essential toilet (ask any boating lady,) electric anchor winch, single burner stove and built in ice box. Plus, it sits on a strong, dual axle multi-roller Dunbier trailer.

LAYOUT
Fitting inventory into any 5.85m boat means there’s not going to be queen size beds and domestic size bathrooms.

So let’s have a look at what Streaker has done here.

Starting at the pointy end, there’s a Muir electric winch set up to be operated from the helm at the flick of the proverbial switch. A large hatch in the cabin top actually allows you to get forward easily, but there’s no need to while anchoring normally. The windscreen is safety glass.

Moving into the cabin, (remember everything is ‘standard’ so if it’s mentioned, it comes with the deal) the standard bunk infill is sized to sleep two adults.

The cabin is also line inside, keeping things nice and quiet and helping the interior to stay cool. A portable ‘loo is sited beneath the helm side bunk cushion.

As you move out of the cabin going aft, to port beside the passenger seat is a small sink with pressurized fresh water supplied from a 57lt tank. An icebox is hidden away below a flush hatch in the deck between the seats. These are really deep buckets mounted on moulded lockers and both have a neat stainless steel footrest.

The seat bases are used as storage lockers with shelves inside and both top and side entry. The helm seat includes the tackle locker into its base, and the passenger seat flips over to reveal a single burner gas stove.

Lowrance electronics are supplied, including an LMC 332C colour GPS/fish finder. Grab bars are fitted in appropriate places around the helm area including across the screen frame, and there’s a privacy curtain between cabin and cockpit. Stainless work on the test boat was particularly well done.

Hydraulic steering is standard as is a Ritchie compass and a waterproof switch panel. I would need the helm seat repositioned from where it was in the test boat and the people from Streaker assured me this isn’t a problem.

The boat’s interior sides comprise fitted moulded panels. There’s no flow coat visible in this boat at all! Inside each of these moulded side panels is a shaped rod rack. This particularly intrigued me because few supposedly ‘hard core’ fishing boats built in this country have rod racks done as good as these.

At the transom, the aft lounge is a full size seat instead of the teensy little things you often see on some boats.

For all those fishos out there, when it’s not required, it folds completely flat against the aft bulkhead. This gives the angler complete access to the back of the boat when fighting a fish. This seat also has moulded arm rests and drink holders.

There’s a socket in the deck in front of the aft lounge to hold the pedestal leg for the table unit. A second socket allows the table to be set inside the cabin if preferred.

In the aft bulkhead there’s a pair of matching wells that could be turned into bait wells if needed. But our test boat had battery isolator switches in there.

Beside the engine recess mounted into the top of the covering board, a flat cover hinges away to reveal a hand held extendable showerhead. Each side of the motor is a swim step with an extendable ladder incorporated into the portside one.

There are a pair of flush mounted stainless rod holders in the top deck plus a similar mount for a bait board set centrally over the outboard.

With the test being run in Melbourne, the fully enclosing canopy and clears was a good idea on the day. Full camper covers and clears are supplied and these enclose the cockpit so well they’re quite effective at keeping the weather out of the passenger area. You might have to remove the side curtains and probably the canopy to fish.

PERFORMANCE & HANDLING
We took the boat out of the Yarra mouth onto Port Phillip Bay where the weather was pretty ordinary, but it proved to be no problem. With a 20-degree deadrise at the transom, the 585 Sports Cruiser hull smoothed out the bumps and proved something of a pleasure in what I believe were typical Melbourne boating conditions.

If I didn’t like this boat before, (which I surely did,) I loved it after that ride!

As tested, Streaker was packaging the 585 Sports Cruiser for $66,750, including trailer and all options. That’s not cheap, but you definitely get what you pay for.

You can knock five grand off that by opting for a carburetor Yamaha 150hp two-stroke, or about $1500 for a HPDI two-stroke. But with a 150hp Yamaha four-stroke for power, Streaker’s factory testing figures show a top speed of nearly 75 K’s per hour. There was no chance of us completing our usual performance figures due to the weather. We had to be content to let the deep-vee hull deal with the wind chop as it came. But the Yamaha did lift it onto the plane effortlessly and maintained a planing attitude without fuss ? despite the conditions.

A SAVAGE TALE
Leon and Paul Savage have been involved in boating all of their lives. As teenagers they were both accomplished waterskiers and fishos. Leon was an apprentice boat builder and shipwright and was already designing and building boats in his spare time.

In 1973, the two brothers decided to make a fulltime commitment to their new company and L & P Savage Brothers Marine Pty Ltd was born.

They went on to build a range of boats called ‘Streaker Boats’. Leon, Paul, and their entire staff love boating. It’s not only their business, it’s their life. Paul Savage says they are their own worst critics.

“So if we think something can be improved on one of our boats, we do it,” he said.

PERFORMANCE
These figures were supplied by Streaker. The motor was fitted with a 14in Vengeance propeller. The conditions were calm and we had two adults, full fuel and water tanks onboard.