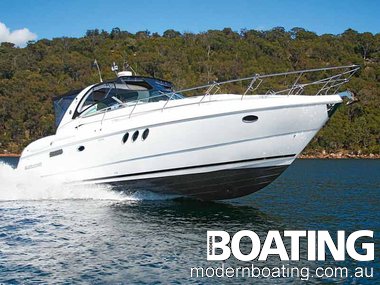 There is a certain irony in the fact that this latest version of Sunrunner’s 4800 is labelled the Euro.
The Euro is the third layout on the 4800 hull, which the Gold Coast manufacturer introduced in 2003. The three styles are the Eclipse (the hardtop version); the Australian variant, which has quite an open aft cockpit with two doors in the transom for access to the boarding platform; and the Euro, which, for my money, is the pick of the three.

ENTERTAINMENT IS KING
The current big trend in powerboats and yachts is the importance designers and builders are putting on entertainment. From this, we may infer that many buyers intend to enjoy parties on board. They want food and drink, they want to be outside but in the shade, and they want the entertainment to be close at hand. And hosts don’t want to be buried below deck or inside while the party hums outside. Hence, Sunrunner’s Euro layout.

Is this important? Yes. A boat is a very focused habitat; you want the layout to deliver your recreational needs. What’s more, when you are paying around one million dollars for it, you have every right to expect your needs to be met. The 4800 Euro’s aft cockpit is this boat’s focus. The large curved settee can seat six to eight people. There’s a gorgeous table with many drink holders arranged around it. There’s a 240V, hot-rock barbecue, an icemaker, fridge and cocktail cabinet.

“People rarely use the downstairs galley,” says Sunrunner’s David Butcher. “The upstairs barbie is more popular.”
The fabric top can roll away for the open-air feel, or the whole aft cockpit can be enclosed by clears. Behind the cockpit is a sunbed. For some time I thought sunbeds were an anachronism in this era of melanoma awareness, but Butcher (and other boat dealers) say that many people, particularly young women, are still intent on pursuing a tan and demand somewhere to get it. “To my mind this layout is ideal,” says Butcher. “If it rains and you have to put the clears on, that aft awning makes sure the cockpit remains a usable space. A lot of boats run the covers straight down from the targa bar, which would really kill this space.”

LUXURY APARTMENT
Though the cockpit arrangement is perfect for entertaining, let’s not forget that downstairs is a luxury apartment with two bedrooms, two bathrooms and a full kitchen. The master cabin in the bow has an island double bed and everything you could possibly want by way of ventilation and storage. The ensuite has a vacu-flush toilet, and the shower is of the retractable, flexible type. This seems a bit basic, but there’s a reason; the aft bathroom, which serves as the day head, has a full-sized, glass-enclosed shower cubicle.

In the galley, there’s a four-burner cooktop and microwave, all 240V because a generator is standard, so there’s no gas to fiddle with and worry about. The fridge is domestic-sized, with two front-opening doors for fridge and freezer cabinets. The dinette table can be lowered to form a double berth if needed. Sunrunner can provide infill cushions. The aft cabin has a transverse bed with plenty of headroom and storage. This is a very stylish interior. I really like the glossy treatment of the cherrywood trim, as it looks good and reflects light. The three angled ports each side of the saloon are a superyacht echo. They all open for flow-through ventilation. Despite the flash interior, its a very comfortable boat, a nice place to retreat to at bedtime, or when the weather turns, or god forbid you have had your fill of fresh air.

SIX-CYLINDER MUSCLE
This boat is the second 4800 to use Volvo’s D12-800 series 12.1L sixes, which pump out 775hp each. “We built the 4800 with 575hp D9s,” says Butcher, “but we find the D12s suit the hull better. Much higher top speed and cruising speed, and better fuel economy despite being bigger”. The Volvos have shaft drives with five-blade props.
The 4800 hull has a 15′ deadrise, but this is not a simple deep-V. On the centreline aft there is a sort of pod that increases buoyancy aft and provides a semi-tunnel effect for the props.

The 4800 is fitted with Volvo’s QL (Quality Line) trim tabs. These are simple composite blocks that slide up and down on the transom, projecting only 50 to 60mm below the hull. They are electrically operated and simpler than the hydraulic drive on conventional tabs. One advantage is that they don’t project aft, like conventional tabs, and run the risk of damage.

The Volvos are a bit noisy at idle but the sound level doesn’t rise as revs increase, and at cruising speed they are quieter than most. Either Volvo has started making their turbos quieter recently or Sunrunner has done a great job of suppressing the turbo whistle, to which Volvo Pentas have been prone in some past installations.
Volvo Penta’s trolling function on the throttles idles at 525rpm and four knots, invaluable on rivers when big boats exceed four knots even on one engine. At the normal setting the same revs give 6.4 knots.

It is easy to forget that this is a 48ft boat with a dry weight of 12,500kg. These big Volvo Pentas push the 4800 straight up to speed as if it were a 30-footer. Top speed is 2300rpm and 35 knots; an easy cruise is 2000rpm and 30 knots, when she is burning 208L per hour. Twenty-six knots gives you 1800rpm at 156L per hour.
The 4800 trims a little high in the bow but this is no practical drawback because you retain visibility. She is responsive to the tabs. We set out to get speed readings at incremental revs stages. To do this, you run the boat up to, say, 2500rpm, wait for speed to stop building, then log the speed and fuel consumption. It is too complicated to play with the tabs while doing this.

Later, Butcher settled the 4800 at a happy cruising speed, then trimmed her with the tabs, whereupon the speed increased, fuel consumption dropped and she gave us different readings from the ones we got when accelerating through the range.

An owner would quickly work this out. For a big, luxury boat, the 4800 was surprisingly economical to run. You can have a range of 650nm if you keep the speed down to 9.1 knots, says Butcher. The control panel for the tabs is great; logical in a Scandinavian way. The graphics show which switch is for bow-up and which is for bow-down. Incremental lights show tab position; the lights flash when they are adjusting. At speed she turns with about a 50m diameter and speed doesn’t rub off when you are doing it.

This is a dry hull. She has a pronounced lip/chine, which runs from above the static entry right to the stern. As we set off, Butcher said bravely, “I guarantee we won’t get a drop of spray on the screen regardless of the weather”. There was no spray, but this was a quiet, quiet day both inside Sydney’s Pittwater and offshore. The spring sun, unsure whether winter was over or not, bounced light off an endless glassy seaway the Ancient Mariner would have recognised.

The hull is quiet underway. Sunrunner does inner and outer hull mouldings, with foam in the space between, so if you go downstairs while underway, you hear no sounds of movement in the structure. The 4800 has quite low-geared, power-assisted hydraulic steering. The throttles are perfect. There’s an excellent switchboard; Butcher drew my attention to the anchor windlass reset; owners have been known to overload the windlass when retrieving the anchor, thus throwing the circuit-breaker. The reset allows instant recovery.

This boat lives in a tight berth with a sandbar only a boat length from the piles. Butcher had no trouble getting in and out with the standard bow and stern thrusters to help. I don’t think he needed them; I certainly would. As Butcher said, in a million-dollar boat, an owner expects that sort of equipment.

The electronics are worth a story in themselves. The 4800 has Raymarine’s E80 navigation system. New on the boat reviewed here is Volvo’s engine diagnostics system, which is interfaced with the Raymarine system, so all the information you can possibly want about engineering and navigation is right there on the same screen.

The Sunrunner 4800’s most direct competition comes, I suppose, from the British imports, but although of similar configuration, they are very different in detail. With the 4800’s configuration you can have an open boat, semi-open or fully enclosed. Its configuration means and here we leap into cliche territory, it is a truly Aussie boat for Aussie conditions. Forget the Euro nomenclature.

When a boat is 48ft long, it overcomes the need for design compromise; you can have your cake and eat it. And the 4800 is built here, so it is Aussie cake.