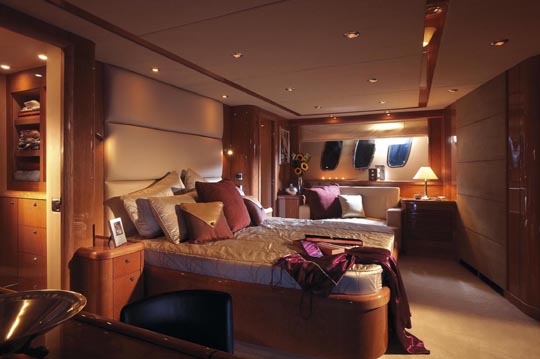 Any motoryacht over the 70-foot mark is getting into the seriously ‘big’ category and the Sunseeker 75 Yacht is no exception. But Sunseeker has weaved its magic again and made this boat no harder to handle than your average 25 footer. In some ways she’s easier.

How can that be? Well, the precise tolerances this British boat builder sets during each boat’s construction ensure the light and smooth operation of all the mechanicals, especially the steering and throttle/gear lever controls.

In fact, when it comes to steering, the 75 Yacht’s helm is lighter and smoother than most 6m boats I have driven. You may think that’s a big call, but anyone who has been behind the wheel of a Sunseeker at sea will attest to the excellence of each boat’s steering. In a word, it’s brilliant.

It’s quite astounding in a boat of this size to be able to turn the helm a couple of centimetres and watch the bow immediately respond and move a couple of centimetres in that direction. You can actually steer this boat with your little finger. This responsiveness also aids slow speed handling. In most big boats you use the motors to steer at slow speeds (putting the starboard engine in neutral, with the port engine in gear moves the boat to starboard, etc.), but on the Sunseeker 75 Yacht you ‘can’ use the helm to make slight direction changes.

Couple this responsiveness with her smooth and light electronic gear and throttle controls and you get the precise handling that makes driving this boat so easy. You don’t accidentally give her too much throttle, because the throttle levers are tight or sticky, which can sometimes happen with mechanical controls.

But wait… there’s more! The 75 is also fitted with bow and stern thrusters, so manoeuvring around the marina is child’s play. Her wide beam also keeps the props well apart, so with one engine in forward and the other in reverse this boat spins easily within her own length. Another positive for her manoeuvrability.

Out on the water the Sunseeker 75 Yacht lives up to the formable reputation her predecessors have earned. While she doesn’t have the awesome acceleration of Sunseeker’s Predator line-up, she can still muster some push-you-back-in-your-seat performance from her twin 1500hp V12 MAN diesels.

Push the throttles fully forward and the revs build steadily until around 1500rpm when the turbos kick in and she’s quickly away, building to a top speed of around 32 knots. Pull the sticks back to three quarter throttle and she’ll cruise effortlessly at 25 knots, giving her a range of approximately 300 nautical miles.

Idling along at 7 knots (pulling 660rpm) her fuel burn was only 9lt per hour per motor. You can also take a leisurely cruise around the harbour at 13 knots (1200rpm) and she’ll burn only 110lt per hour.

Like all the hulls in the Sunseeker range, the 75’s bottom makes her a top ocean-going boat. This boat doesn’t have an exaggerated flare in her bow, but she does have an extremely sharp bow entry, coupled with wide down-turned chines carries well forward. These form tunnels on each side of the keel, which trap air and generate lift , so the boat planes effortlessly and delivers a soft, dry and quiet ride. Her chines give her excellent lateral stability and her 42,200kg dry weight (approximately 50,000kg fully loaded) mean this boat’s not going to go bouncing all over the ocean, even into a head sea.

But having driven many Sunseekers, I have found that the more stick you give the hulls, the better they performs. You need to generate that air under the hull and give the bow enough punch to slice through the swells cleanly. Having her props in mini tunnels also ensure the hull tracks straight, even in a following sea, and she digs in during turns and comes around easily.

LAYOUT
Sunseeker is one of the few production motoryacht builders that give the buyer some leeway with the boat’s interior design and layout. And while this Sunseeker 75 Yacht has the standard layout (master stateroom and en-suite amidships, forward guest stateroom with en-suite and two double bunk cabins to port and starboard that share the day head) the new owner has added his own touches.

For instance, the normally steep staircase in the saloon has been removed and the hatch above has been turned into a skylight, which lets more natural light into this area. In this case, the staircase was replaced with a large cherrywood cabinet that houses an extra fridge/freezer, a bar and a classy glass cabinet.

At the helm the single fully adjustable, pilot-type seat has been given a mate, so two can now sit in absolute comfort behind the helm. There’s a skipper’s door on the starboard side that aids rearwards visibility, which is seriously impeded by the galley bulkhead behind the helm. Forward and port visibility is very good.

The standard of fit-out and finish of the 75 is extremely opulent and luxurious. The fully functional galley would put some smaller restaurants to shame and the huge windows in the saloon really help bring the outdoors, indoors. Quality sound system, huge plasma TV, plenty of luxurious leather lounges, movable coffee table and a cleverly designed dining table that’s surrounded on three sides by a U-shaped lounge and has two swivelling bar stool type seats mounted in the floor on the open side. These don’t encroach into the helm area and they are useful seating.

The aft cockpit is expansive and uncluttered. There’s a transom lounge and that’s about it, so there’s plenty of room to place a large table and seating for a bit of alfresco dining.

Access to the air-conditioned crew’s quarters and engine room are through a doorway in the transom, which you can get to via the swim platform. The crew’s cabin is spacious, has two large bunk beds, a big bathroom and plenty of hanging room. The engine room is enormous with full standing head height and plenty of room around each engine to allow ease of servicing and daily maintenance. The tender sits on a frame mounted on the swim platform.

Moving forward to the bow is made easy by the wide teak walkways around the saloon cabin. There’s a big sun pad on the fore deck and a ‘Dicky’ seat in the front of the cabin roof. It’s just the place for the ladies to relax and soak up a few rays when underway. Innovation shows up in some funny places and on this boat it’s in the rope locker next to the anchor locker. When open the ropes are all looped around a stainless steel bar, which keeps one end of each rope within easy reach. So you don’t have to stick your head into the locker and stretch down to reach the ropes.

Access to the massive flybridge is via steps on the starboard side of the saloon’s aft bulkhead. The well equipped helm station has a double helm seat and double navigator’s seat. Behind these are a big U-shaped lounge, a barbeque and a wide-open rear area where the deckchairs sit. The flybridge is more of an upper deck and entertaining area than simply a place to drive the boat from.

OVERALL
The Sunseeker 75 Yacht simply takes you breath away. She’s a classy, opulent and stylish lady, with all the amenities and features to make your life at sea even more enjoyable. As an entertainer she’s second to none and as a performer, yes she will push you back in your seat when you put the hammers down.

You’ll need to be good friends with your bank manager when you go to buy one of these magnificent motoryachts, but you won’t be left wanting. This boat is the complete package and her advanced technologies mean that with a little practice the owner will have little trouble becoming their own skipper.

SUNSEEKER’S RANGE
The Sunseeker range is a world leader in performance, style and luxury. You can choose from a model line-up designed to satisfy almost any taste, from the new and stylish practical Sportfisher 37 to the sublime elegance of the 95 Predator, or the awesomely impressive 135 Yacht. According to the team at Sunseeker, each craft typifies the sheer quality and unrivalled reputation of the Sunseeker brand.

Characteristic sleek lines and fluid curves all contribute to their unmistakeable appeal. This is manifested further by outstanding performance and excellent handling across the entire range, from the power and grace of a Manhattan 74, to the remarkable pace and agility of the Fabio Buzzi designed XS2000 high performance race machine.

ENGINE ROOM
The Sunseeker 75 Yacht was powered by twin V12, 1500hp, D2842, MAN diesels. These are big engines, but there’s still plenty of space in the engine room to house them, plus the two gensets, air-conditioning units and all the other associated paraphernalia that’s required.

PERFORMANCE
With three people onboard and full tanks, the 75 produced the following performance figures.

+ Changes to the saloon; Excellent standard of finish
– Rear vision from helm