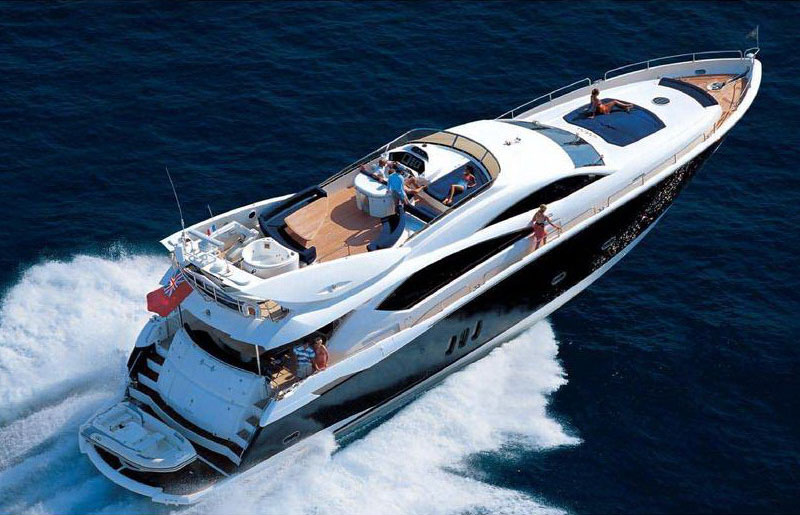 In the world of boating, five years is a mere drop in the ocean (pardon the pun), but that’s how long it has taken British motor yacht builder Sunseeker to firmly entrench itself in the Australian market. By the the 2005 Sydney International Boat Show, Sunseeker Australia will have delivered more than 70 new vessels Australia-wide.

Some readers may think this isn’t many boats, but it has to be looked at in the right context. We are not talking about $30,000 bowriders here, the Sunseeker model line-up ranges from super high performance race-bred speed machines to magnificent multi-million dollar 140-foot luxury motoryachts. So, when you begin to contemplate the millions of dollars Aussie boaters have already spent purchasing these great boats, you get some insight into the huge slice of the Australian luxury boat market Sunseeker has secured.

There are many factors contributing to this success – modern styling, superb build quality, undeniable craftsmanship, great performance and handling and a huge range.

Today’s Sunseekers can also boast a few other pluses that many manufacturers are yet to pick up on, like almost total automation. According to Sunseekers Sydney-based operative Mike Garret, all of the new boats systems are so well automated that he can basically train up a new skipper on a boat in one day.

However, Sunseeker still insist on sending a team across from the UK with every new boat delivered to ensure both boat and skipper are fully briefed and ready to take over the reins.

The Sunseeker 82 Yacht is an excellent example of just how far modern motoryacht design/functionality has evolved. This impressive vessel boasts many design innovations, including offering both owners and their VIP guests equally luxurious accommodation in the forward and amidships staterooms. Yes, the owner’s stateroom is the larger, but both cabins feature walk-in wardrobes and en-suites, writing desks, huge flat-screen plasma TVs and exquisite leather lounges.

The interiors are finished in cherrywood, but this time, instead of the norm (supershiny high gloss), a classy semi-gloss has been used to accentuate the beautiful grain of the cherrywood. Hanging lockers, fulllength dressing mirrors, plenty of storage, the list goes on and on.

There are two equally spacious bunk cabins. One has the bunks side-by-side (this cabin can also house a double bed) and the other has two side-by-side with another above, making it a three-berther.

Step up into the main saloon and you enter an open-plan cabin where the clever use of small dividers and cabinets gives the impression of four separate areas – helm, galley (with Miele appliances), formal dining room and lounge room. Suffice to say they all feature the latest in electronics, clever design to maximise the use of all available space and a finish that will leave the five-star hotels of Europe begging.

The 82 Yacht has enormous plate-glass windows that flood the main saloon with natural light and offer stunning 360-degree vistas to all in the main saloon.

The helm station, with its electrically adjustable pilots seats, is comprehensive, but not laid out like the flight deck of a 747. The instruments are easy to read and understand quickly, so the skipper will have little trouble remaining in complete control at all times. There’s even a remote TV system, monitoring the important areas of the boat such as the engine room.

The covered aft deck is ideal for alfresco dining and there’s a huge swim platform that lowers hydraulically into the water (a great place to cool off when you don’t feel like diving in). There’s also wide walkways leading to the vast foredeck with sun-pad and bow seat, all features combing to make the 82 Yacht built for total on-water living.

The flybridge adds a third storey to this vessel and boasts a built-in barbeque, plenty of uncluttered deck space and enough seating for more than 14 people to park it in total comfort. But during this test there was no bimini fitted, so the blazing sun took its toll. This has now been addressed.

Out on the water the 82 also impresses. While she doesn’t exhibit all of that push you back in the seat acceleration demonstrated by her Predator sisters, this more than 55-tonne (dry) boat is no slouch. Powered by twin 1550hp CAT diesels, she tops out at 32 knots, but will cruise comfortable all day at 22 knots. With a full load of fuel (6500lts) she has a range of approximately 350nm. But pull the throttles back to around 12 to 16 knots and you could make the trip from Sydney to the Gold Coast with ease.

From a standing start push the throttles forward and the 82 eases onto the plane before the turbos kick in and her speed builds steadily. There’s no distinct leap out of the hole, but with a boat of this size there doesn’t need to be. What is really impressive about the 82’s performance is her instantaneous response to the helm. With most boats of this size steerage at slow speed is usually controlled by taking one of the engines out of gear for a few seconds. This turns the bow in the direction of the neutral engine until it is placed into gear again. However, because the 82’s props are positioned in mini tunnels, she gets good water flow over her rudders, enabling a quick response to the helm. So, even at slow speeds, if you turn the helm a couple of centimetres, you can see the bow also move a couple of centimetres. That’s impressive.

Off shore this hull requires a bit of stick to deliver optimum performance. You need to get her up and planing. Once there, the hull slices through the swells cleanly and traps air between its oversized chines and the keel to help reduce drag and generate lift for a soft, quiet ride.

With a price tag of around A$7.5m this boat approaches the top end of the Aussie market, but stays well within the ballpark for a vessel of this size and type. However, what does make this boat standout is the diversity of layouts that she can be configured in. The 82 maybe a production boat, but basically if you stay within the parameters and constrains of her main components, you can customise her interior layout to suit your own purposes.
Even so, straight from the factory there are more than 10 variations to choose from.

Sit behind the helm at the lower station and you’ll instantly realise the Sunseeker 82 Yacht is one hi-tech vessel, but she’s far from daunting. Her easy to understand and automatically monitored operating systems will ensure smooth sailing over even the roughest waters.

According to Sunseeker, the same fundamental principles that guide its design philosophy are applied to the manufacturing process. Meticulous attention to detail and the use of lighter composite materials, ensure a robust superstructure that can accommodate a flexible range of layout options.

In every respect, customers are offered enormous flexibility in terms of specifications, layout and choice of engines. The net result is that each Sunseeker Yacht is a reflection of its owner’s tastes and preferences. Furthermore, its engineers and craftsmen employ cutting-edge equipment, software and technologies, so that each new design combines strength, durability and luxury with ergonomic ingenuity.

The engine room on the 82 Yacht is enormous and features full headroom and easy access to both engines, air-conditioning unit and genset.

In a low 1.5m swell the Sunseeker 82 Yacht produced the following speed-to-rpm readings.

Story and Photos by Ian Macrae.