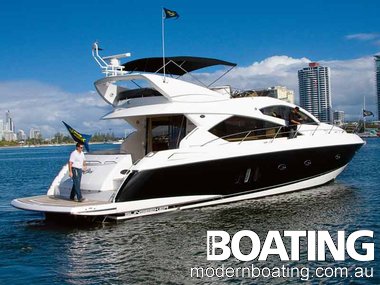 Spend a few minutes with Sunseeker owners and the passion rubs off.

It won’t be long before Sunseeker celebrates 10 years of operation in this country. During that time, these iconic British-built luxury motoryachts have amassed quite a following. Some in the industry will say this was through clever marketing, and I am sure that played a part, but after testing just about every vessel Sunseeker Australia has imported over the years, I can honestly say there’s more to it than that, ‘word of mouth’ has been just as important to their success.

You only have to talk to a Sunseeker owner for a few minutes and their infectious passion will enthuse you. But they also talk to their mates about Sunseeker’s clever designs, which are aimed at meeting the rapidly changing aspirations of today’s motoryacht buyers, and each boat’s consistent build quality and high standard of fixtures and fittings, most sourced from Europe. It then becomes a case of “if Bill’s got one, I want one too, only bigger!”

But it’s not only the men that are saying this, because these beautiful, refined and user-friendly vessels normally get the nod from the girls well before any money changes hands. Why? Because every detail of a Sunseeker’s construction and operation is aimed at the buyers enjoying their time at sea. When you buy a Sunseeker, you’re buying a luxurious floating apartment, with more opulence than some of the great five-star hotels of Europe. But it doesn’t stop there… These floating palaces can also handle just about anything Mother Nature wants to throw at them.

Look at it this way: more and more small trailerboats venture well offshore these days and their ability to do so comes from their state-of-the-art hull design and superior engine performance. On hull design, many modern deep-vee hulls have aggressive down-turned chines that they carry well forward. These work in conjunction with an extremely sharp-bow entry to trap air in the mini tunnels formed between the outer edges of the chines and the keel. The sharp bow slices through the water cleanly and the trapped air irons out the bumps and cushions the ride.

These big chines also aid the hull’s stability at rest because they sit in the water, not above it, so the boat doesn’t slop from side to side. Then, unlike traditional heavily-flared bows, which throw water up and away from the boat when underway (this water can get blown back inboard in certain sea conditions), the chines throw water down and away from the hull from a point just forward of the driver’s position. No water is thrown up, so the ride remains drier. But there’s more… because the hull doesn’t need to have an extreme flair in it anymore to produce a soft, dry ride, there’s inherently more usable space in the bow.

So, that’s the design of a modern 6m half cabin. What’s that got to do with a 60ft Manhattan? Both have excellent offshore credentials and surprisingly similar hull designs. This Sunseeker also carries her chines well forward and viewed from the bow when underway, it is quite obvious her sharp-bow entry and oversized chines create large tunnels of trapped air to cushion her ride and ensure a relatively smooth and quiet passage across the waves. Obviously, running head-on at speed into 4m swells will cause any hull to pound, but swing that angle around to 45 degrees and you’ll be surprised at just how smoothly these hulls ride in a big sea.

Unlike our hypothetical 6m trailerboat I used in the examples above, because of this boat’s overall length (64ft 4in), the hull flattens out more at the stern than the smaller boat, which helps lateral stability at rest. This will be appreciated by anyone with a tendency for motion sickness sleeping on the boat when she’s on a mooring or at anchor. Almost 34,000kg (fully loaded) takes a lot of pushing around before there’s any undue movement at rest. (That should keep the women and children happy, and many of the guys, I might add.) The flatter stern section also helps control any rolling motion when underway, you could call it a built-in stabiliser.

Twin 900hp common-rail MAN diesels power the latest Sunseeker Manhattan 60. These engines are quieter and smoother than the standard 1015hp Cats used in previous models. They deliver plenty of grunt and a surprising turn of speed. This 60 cruises effortlessly and surprisingly economically at 24 knots pulling 1750rpm, but open her up and she’ll hit 33 knots at 2360rpm.

Like other Sunseeker models, the Manhattan 60 runs her props in mini tunnels, which aids their ‘bite’ on the water, allowing for tight cavitation-free turns with no loss of forward movement and giving the 60 her ‘turn the helm 2cm and watch the bow move 2cm’ performance.

New layouts
Suffice to say the standard of workmanship, joinery and quality of fitments and finishes is first class on this vessel. Nothing has been left to chance. But it’s her new layout that’s sure to grab buyers’ attention. This new 60 has her large aft cockpit and open-plan main saloon all on one level and it’s only a slight step up to the raised lounges surrounding the lower helm. It’s a great set-up that keeps everyone together and enjoying the ride and scenery with the skipper. (Note I haven’t mentioned the galley yet). Natural light floods the saloon from three large windows on each side. These have wooden Venetian blinds for privacy when required, but the 360-degree views when underway are spectacular.

In true superyacht-style, what seems like every conceivable electronic has been fitted at the lower helm station (it matches the extent Sunseeker has gone to with the saloon’s sound system and pop-up plasma theatre centre). Plus, there’s a skipper’s door on the starboard side.

Six stairs lead down to the sunken galley, which is positioned on the port side just forward of the luxurious full-beam amidships master stateroom. This galley is as big as you’d find in most houses, but its piece de resistance (apart from all the European appliances) is that when you stand at the bench and look up, the dash has been cut away, so the windscreen acts like a giant skylight and the effect is fantastic. There is no dinette down here; it’s purely a food preparation area.

Like the master cabin, the opulent guest’s stateroom in the bow has its own ensuite, as does the twin bunk cabin to starboard opposite the galley, but this cabin’s ensuite also acts as the day head.
The airconditioned crew’s quarters are fully self-contained with a shower and a toilet under the transom bulkhead.

Third level
Wide, gently sloping stairs lead from the aft cockpit to the flybridge third storey, which is sheltered from the elements by a bimini top. Up here there’s room to party and I am sure the barbecue and drinks fridge will get a good workout. The upper helm replicates the lower station in the electronics department, there’s a large sunpad next to the helm for those wishing to work on their tans and the massive U-shaped lounge will enable all to travel topside if they wish. If the flybridge sunpad gets too crowded there’s another out on the foredeck.
Driving from the flybridge gives the skipper a full 360-degree view, and when the flybridge hatch is open, the uninterrupted view of the starboard swim platform makes docking a much easier affair, not that it’s overly difficult using the electronic controls and the bow thruster. This baby can spin in her own length.

The wrap
This isn’t the first Manhattan 60 we’ve seen in Australia, but in my opinion it’s one of the best to date, even though all the food prepared down in the galley has to be brought topside for consumption. Yes, the ‘galley down’ is a bit of a compromise, but it was designed that way to create more usable space in the main saloon. And it has been done well. The galley might be down in the bowels of the ship so to speak, but it’s flooded with natural light and it’s quite a sight looking up through the windscreen.

With a price tag of around $3 million, the Manhattan is not an inexpensive boat by any means, but you get a lot for your dollar and it’s first class all the way. Soon you’ll be telling your friends.