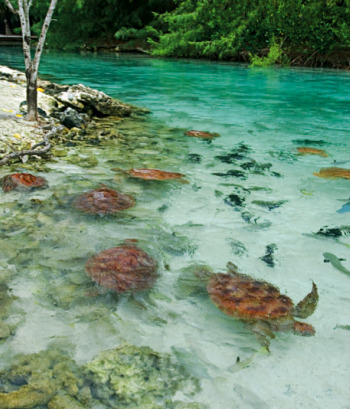 The Tahitian pearl is born inside a fragile black- lipped oyster: the Pinctada margaritifera, variety Cumingi. The pearl creation process begins with the introduction of a foreign substance into the flesh of the oyster. This meticulous and delicate operation only produces its results two years later, with no guarantee of success. Only three out of every hundred pearls born are perfect. The various farms around the Tahitian Islands allow you to witness each stage of life of this gem of the lagoons, from the grafting to the birth of the pearl, the magical instant when it reveals its brilliance, its orient and its exceptional colours.

Add the name Bora Bora, and you may also think of honeymoons, movie star couples and movie classics set in the south pacific. Yes, Tahiti and her islands have enchanted thousands in the past and continue to do so every year with her incredible vistas, culture and climate.

Regarded as the most beautiful island in the Pacific and certainly the most beautiful lagoon in the world, Bora Bora boasts tranquil translucent waters and fascinating marine life. Home to just over 4000 inhabitants, the surrounding motu (islets) are the ideal spot for a secluded, romantic honeymoon. 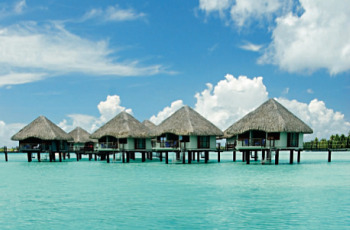 Mount Otemanu, at 727m, is the island’s highest point.  Pora Pora—the ancient name, meaning ‘first born’—came from legends describing this as the first island to rise when Ta’aroa, the supreme god, fished it out of the waters after the mythical creation of Havai’i, now known as Raiatea. Although the first letter ‘b’ does not exist in the Tahitian language, when Captain Cook first heard the name he mistook the softened sound of the Tahitian ‘p’ for ‘b’ and called the island ‘Bola Bola’. Originally settled in the fourth century, the island is a verdant jewel in a beautiful sea. Lush tropical rainforests and its location at the edge of an azure lagoon make Bora Bora one of the most beautiful, romantic places in the world.

Not far from Bora Bora are a string of other islands, different, but possibly as beautiful in their own way. Raiatea and Taha’a are two separate islands about 193km (120 miles) northwest of Tahiti, sharing the same lagoon among the western Society Islands, known also as the Leeward Islands (Tahiti sits among the eastern cluster, also known as the Windward Islands).

Raiatea is the second largest island of French Polynesia after Tahiti and boasts lush green valleys, stunning waterfalls and  pineapple and vanilla plantations. Raiatea was the centre of religion and culture more than 1000 years ago and still lends enchantment to ancient legends told to this day. The green-carpeted mountains include the celebrated Mt Temehani, a sort of Polynesian Mt Olympus.

The Tiare Apetahi is found on Mt Temehani. It is a delicate white flower, so rare it cannot be grown anywhere else on earth. Each dawn, the petals open with a slight crackling sound. Legends describe this as the sound of the broken heart of a common woman who was not allowed to marry the son of the Tahitian king. The flower is also said to be her hand. According to the legend, she died in her lover’s arms, promising to make her hand available to him to caress every morning when he visited the mountain.

Taha’a is enclosed in the same lagoon as its twin sister island, Raiatea. Here you can explore peaceful villages or climb up into the mountains for a spectacular view of the coral fringe and azure waters. Taha’a, with the rich aroma of vanilla lingering heavily in the air, offers a glimpse of the traditional, tranquil life of the Tahitians. The flower-shaped island’s simple beauty is charmed by soft mountain shapes and surrounded by tiny motu with bright sand beaches. In the fertile valleys cutting within the island, local farmers grow watermelon, vanilla and copra. 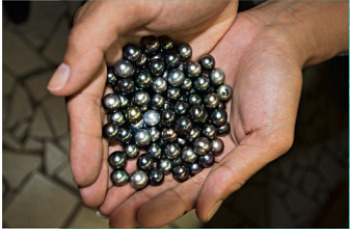 My wife Jayne and I planned our honeymoon to Tahiti. The first week we intended to live it up in the luxurious Le Méridien, Bora Bora. For the second week, we chartered a one-year-old yacht from Sunsail to explore other islands on our own—a perfect mix of pampering, fine dining and adventure! Now, I know what you’re thinking—newlyweds stranded on a boat for a week is the perfect recipe for disaster. Somehow we survived! In fact, our time sailing from one irresistible anchorage to the next from day to day was heavenly. We’d move just a short distance each time, and were always perfectly located mid afternoon to enjoy the pristine water, coral and—of course!— drinks on the deck at sunset!

For many, the thought of ‘roughing it’ on a yacht might be too much, especially after our first week. But, in many ways, there are many luxuries to be shared by spending time out on the water. Three hundred-and-sixty-degree water views aren’t to be scoffed at, nor is cooking a fine meal on the charcoal barbecue while you sip wine and reflect on the day in its last glistening rays.

By chartering a bareboat, your options are almost endless. From Sunsail’s base at Raiatea, the islands of Bora Bora and Huahine are each a day’s sailing away. Otherwise, if weather or time doesn’t permit, you can simply explore the isles of Raiatea and Taha’a as we did; these are both surrounded by the one coral fringe. Yes, the waters inside are dead calm and virtually unaffected by the minimal tidal ranges.

Jayne and I explored many beautiful places with our yacht and got to experience another side of Tahitian culture we would have missed, had we stayed in the luxury resorts. Even simple tasks like gathering the week’s provisions for the yacht was a novel experience in the local ‘waterfront’ supermarket, featuring an entire aisle of French red wine and grain-fed meats flown in from New Zealand!

So of course, the big question is—did I pack a fishing rod? Well, I’d always vowed I wouldn’t, but Jayne actually insisted I do, considering we were spending the time on the yacht. Who was I to argue with the little lady?

On our third morning, we arrived at a sandy cay alongside Motu Tau Tau, essentially a coral passage between two palm plantations that bore a line of sight directly to the island of Bora Bora. despite having just spent a week there, this was easily the best view we had seen anywhere. So good, in fact, that we actually didn’t pull the anchor until three days later!

On this large sandy flat, I found many things, like beautiful coral, coconuts, and— interestingly—huge bonefish! These silver bullets of the tropical shallows are  ‘reserved’ for fly fishermen, so to speak, so my discovery was an exciting one indeed. I’d brought an eight weight Loomis rod with me and some flies for bonefish. I took the tender into the shallows and began to scan the water for silver shapes and shadows. A good distance ahead, I sighted a school of eight or nine big bones circling. Readying my fly and line, I laid out a long cast just a metre to the side of the school. As I began the retrieve, the nearest bonefish immediately raced up and sucked the little fly in. Within seconds, I had lost all of my fly line and lots of backing and had to devise a plan to somehow prevent my light tippet being broken by the countless coral outcrops. Soon enough, I tailed a beautiful 4kg bonefish in ankle deep water, with Bora Bora in the background and Jayne enjoying breakfast on our yacht a hundred metres away—it was paradise!

I spent some time looking around for more bonefish, but the school had fled when I hooked my fish and were nowhere to be seen. The next morning, at the same time, I returned, and lo and behold, those same bonefish were circling in exactly the same spot! I made another long cast and right on cue, a bone came out and munched the fly. Again, I released another similar sized fish, by which time they’d once again disappeared. On the third morning, it all happened again. This was ‘groundhog day’ fly fishing at its best! Three casts for three big bonefish.

Later that day, we finally pulled anchor and sailed further along Taha’a to the Taravana Yacht Club for the night. This quaint little restaurant, water lapping just below the tables, made a great spot for a long lunch and lovely dinner, with our yacht moored mere metres away, out the front. during lunch, I got talking with the young American owner, who happened to also be president of the local game fishing club. I asked him what he knew about the island’s bonefish. He said they had been caught down deep in the nets but little was known about them feeding on the flats. I told him of my findings and what time of the day they circle around!

The two islands of Raiatea and Taha’a are vastly different, but ruggedly beautiful and unlike anywhere else on earth. Next time, I’ll return to Bora Bora by yacht and definitely sail across to Huahine—an isle the locals claim is the modern jewel of Tahiti.

• for bareboat charters around Tahiti, look at the asia pacific section of SunSail. Hiring and sailing our yacht was carefree and our vessel was just one year old.
www.sunsail.com

• Le Méridien at Bora Bora was unbelievable. We wouldn’t hesitate to stay there again on return. Go to
www.lemeridien.com

• be sure to visit a pearl farm, at least for the insight. Bora Pearl Company picks you up and drops you off for free and we found the tour very interesting. (Jayne found it extra rewarding!) Visit
www.borapearl.com

• While staying at Bora Bora, I went for a couple of scuba dives on a half-day trip. On one dive, we found seahorses and large lemon sharks, while on the other I was absorbed inside a school of at least 100 big eagle rays for longer than half an hour! It was truly a remarkable dive, that should be experienced.

• for other facts and links, look at the tourism commission’s site at www.tahititourism.com