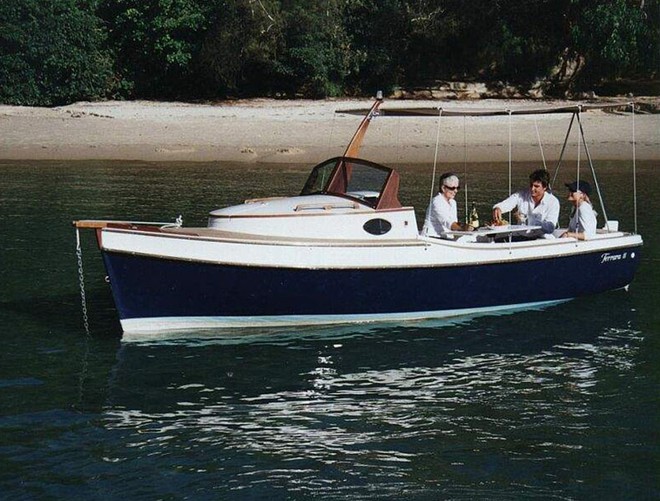 My earliest boating memories date back to the 1960s and fishing trips out on Victoria’s Port Phillip Bay chasing snapper and flathead with my father.

The family boat (dory would be a better description) was moored at the coastal town of Mordialloc, from where we made regular weekend trips weather permitting onto The Bay.

Our boat wasn’t stylish, she didn’t even have a name let alone a cabin, but she was stable and seaworthy and as long as you didn’t mind getting sunburnt, or wet when it rained, was ideal for the job. After all these years I can still clearly visualise that boat. Even then she looked old.

Her clinker hull was dark green with contrasting varnished wooden gunwales. A single engine diesel sat amidships on a narrow plank, which was the boat’s only flooring above the ribs.

There were two thwart seats, one for the coxswain at the tiller the other in the bow.

But for a young boy her most memorable feature was the leather strap used to spin the flywheel to ignite the putt-putt engine.

She’d fire first pull, every pull. And boy, could that boat go. Flat out she had WOT speed of 6 knots. There was no point worrying about getting anywhere in a hurry, it was steady as she goes and life was much more relaxed.

But while I was putting around in boats down south, further north in Sydney similar, albeit somewhat flasher wooden vessels, plied the waters of the Harbour, Pittwater and Hawkesbury River.

Most of these old craft would have rotted away by now, but there has been a genuine resurgence of interest in this type of vessel. Why ? Because they allow today’s boaties to enjoy our beautiful waterways in a more relaxed and refined way. And the big plus is that they are a lot cheaper to run.

There is now virtually an industry within the boating industry building this type of boat. And today these new craft are a far cry from the basic wooden designs of yesteryear.

Sure they look the same, but the new Terrara 18 is now built from modern materials and are a lot easier to maintain.

The latest entrant in this classic field is the Terrara 18. This new boat was designed and built by Nowra-based Kennedy Shipwrights, based on the old timber clinker-hulled boats that cruised NSW’s rivers and estuaries.

According to the boats builder Paul Kennedy, the Terrara 18 takes her name and design from a local clinker boat that was built in Nowra and used to run the Shoalhaven River.

Paul named the boat Terrara after Terara, a small village on the banks of the Shoalhaven River, which was the first settlement in the area until the devastating floods in the 1800s.

The original boat used to make the mould for Terrara featured the distinctive stepped planking of a clinker hull. But Paul bogged these steps up to create a smooth carvel design for the new fibreglass version of the boat.

Being fibreglass, all the problems associated with maintaining a wooden hull are gone as are many of the costs. New owners can look forward to years of trouble free boating from their distinctive craft.

Plus, at only $31,900, if you are looking for a comfortable 18ft craft capable of taking up to six people on a casual cruise on a river, lake or bay, the Terrara may just be the craft for you.

She’s 5.6m long, has a beam of 2.2m and draws only .55m, which allows her to operate in relatively shallow water.

The test boat featured a surprisingly roomy cabin with vee-berths, which are long enough for the kids to stretch out on and that all-important for family cruising marine toilet. By taking advantage of the optional infill cushions the bunks can be turned into a double bed that’s large enough to allow a couple to overnight onboard in comfort.

There was also a lockable and removable cabin door, plenty of storage under the bunks including a compartment for the battery box.

A large hatch in the cabin roof gives access to an oversized and lockable anchor locker, so there should be no need to traverse around the cabin to operate the ground tackle. However, if the need were to arise optional jarrah toe rails can be fitted and the standard jarrah grab rails on the cabin roof add security.

More jarrah adorns the bow in the form of a classy bowsprit. A chromed-brass bollard highlights this.

But it’s back in the aft cockpit that this old classic really shines it’s wide open and uncluttered. The test boat featured bench seats with teak laid top down each gunwale and across the transom.

In the tiller version the engine control lever is mounted on the starboard gunwale in easy reach of the tiller arm.

One option the Modern Boating team considers a necessity is an African Queen sun cover. The harsh Aussie sun would soon turn a pleasant day’s cruising into a sunburnt nightmare without it.

Forward and central in the aft cockpit was the sound insulated engine box, which housed a Nanni 2.45 HE Eco 10hp diesel. The shaftdrive and fuel lines are accessed via a hatch in the cockpit floor. All other underfloor cavities are foam filled for positive buoyancy.

However, with the hammer all the way down and pushing 7.5 knots, the little Nanni rattled like any other diesel running flat out, but it wasn’t loud enough to stifle conversation. There is an optional 14hp engine offered as an option, but considering the boat reaches maximum hull speed at 6hp, unless you intend to carry large loads the 10hp powerplant should have more than enough grunt to push against wind and tide.

The Terrara 18 carries 54lt of fuel in an underfloor tank, which she consumes at 3/4lt per hour at cruising speed. To my calculations that means she can cruise without refuelling for 68 hours, covering around 380 nautical mile.

The boat was easy to control either standing, or sitting on the transom with my feet on the seat. However, when sitting on the lower transom seat most of the team found themselves looking around the cabin to maintain a clear line of sight forward.

The boat also responded well to the large rudder and turned quickly without losing lateral stability.

On the day of our test the waters of Sydney Harbour were calm, ruffled only by a slight 5 knot sou westerly, but ploughing the Terrara through other boat’s wakes didn’t phase the hull at all.

The boat’s sharp entry sliced through these wakes, while the gradual bowing of the hull as it broadened towards the stern pushed water away from the hull to deliver a dry ride.

While classed as a river, lake and bay boat, you should remember that these waterways can get extremely rough in a blow. But at displacement speeds the Terrara displayed the handling characteristics to cope with the return trip if conditions turn for the worse.

The Modern Boating team enjoyed their time on the water aboard the Terrara 18, rediscovering that getting from Point A to Point B in the fastest possible time isn’t always the best way to go.

This new boat will transport its owner back to an era when technology restricted the speed of our lifestyles, forcing us to relax and enjoy the scenery. But don’t be misled; the old world look is only skin deep. The technology behind the Terrara 18 is all 21st Century.

Engine Room
The Terrara 18 comes standard with a Nanni 2.45HE Eco 10hp marine diesel, which provides more than enough power for a vessel of this design. A 14hp engine is available for those who may need to transport heavier than normal loads.

Cruising at 5.5 knots the 10hp motor consumers -litre per hour of fuel giving her a cruising range of around 380 nautical miles. The boat has a top speed of 7.5 knots.

Engine box insulation keeps noise in the cockpit to a minimum, but at full throttle the little Nanni displays the same rattling sound of any diesel engine running flat out.