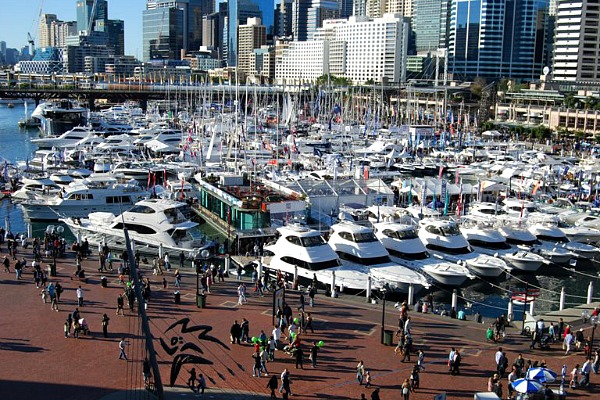 The Boating Industry Association of New South Wales (BIA) is rightly proud of its annual presentation, the Sydney International Boat Show, staged every year within the Darling Harbour Exhibition Centre and on the waters of adjoining Cockle Bay.

It’s a vitally important exhibition for the Australian boating industry and it stands unchallenged as the biggest recreational boat show in the Southern Hemisphere.

Attendance record for the Sydney event stands at 93,500 (approx), more than double the next best attendance at an Australian boat show and certainly a figure that can stand alongside many international exhibitions.

So how does one ‘measure’ a boat show?

It’s fair to say this could be done in three ways; how large is the venue in which its exhibitors display their goods; how many exhibitors turn out for the show and how many visitors does it attract?

No doubt many on the industry’s front line would rate a boat show’s success (or failure?) by the sales achieved.

This is not an easy figure to arrive at; many exhibitors, particularly manufacturers, have no wish to reveal their sales to opposition and many boats are sold well after the gates have closed, often weeks, even months later.

Generally speaking then, the boating industry worldwide is left to measure a show’s effectiveness and importance by its visitation.

On that basis, the honour of being the world’s largest boat show is a virtual ‘toss up’ between Italy’s Genoa International Boat Show and Germany’s boot Düsseldorf.

Both these shows are massive in scope, each attracting in excess of 250,000 visitors to inspect the goods and services of more than 1500 exhibitors.

It could be claimed they make the Sydney International Boat Show look like a minor event with its 300-plus exhibitors and its record 93,500 visitors.

However, it must be remembered that both the Italian and German exhibitions are in regions with populations many times that of Sydney’s approximate 4-million residents.

Additionally, both have borders with other nations, making it a relatively simple matter to attract international guests and international visitors; far easier to take a drive through the countryside as opposed to an ocean-crossing voyage to reach Sydney.

If one takes venue space as the means to estimating the size of a boat show, then I’d say Fort Lauderdale comes in at number one.

This huge Florida exhibition, primarily showcasing larger vessels, both power and sail, requires six substantial marinas and along with Düsseldorf and Genoa is ranked as one of the most influential shows on the world calendar.

Many boat shows across the world manage to attract in excess of 100,000 visitors on a regular basis, but again, these are all exhibitions situated closely to large populations.

In England, the London International Boat Show, usually staged in early January, is regarded as the opening show of the calendar year.

Four hundred exhibitors are usually on hand to display their product to an attendance regularly in the 110 to 120,000 mark.

London has been operating for 57-years and claims it “caters to all budgets”, from dinghies to motor yachts and everything in between.

English boaters get two bites of the proverbial cherry later in the calendar year with the Southampton International Boat Show, described as “the largest outdoor event of its kind in the United Kingdom.”

Across the English Channel and also in September, French boating enthusiasts too have two shows to call their own.

The Grand Pavois de la Rochelle, which I attended several years ago on behalf of the BIA, attracts nearly 900 exhibitors and often has more than 700 vessels, the majority sailboats, on display.

Each year, the Grand Pavois de la Rochelle has a themed ‘guest of honour’ exhibit, inviting another seafaring nation to display its culture and product.

It was Australia’s turn as guest of honour that took me to La Rochelle some years ago.

About 1000 vessels of all shapes and sizes were on display at Athens last year, with nearly 280 exhibitors presenting their goods and services.

In the picturesque Spanish city of Barcelona, just over 300 exhibitors, roughly the same number as Sydney, were on hand at two separate venues to welcome 125,000 visitors.

The famous Miami International Boat Show has recorded attendance in excess of 150,000, but it has dropped off recently following the economic downturn and organisers more recently have been delighted to ‘sneak’ above the 100,000 mark.

It hosts a massive 2000-plus exhibitors, but among its displays are many non-boating related goods such as marine art, nautical jewellery, sportswear and non-consumer industry equipment and componentry.

Its importance to the US industry, however, can be seen in the fact that many of boating’s most illustrious brand names utilise Miami to launch new product.

Organisers claim Paris Nautic caters to a much larger market than its La Rochelle “cousin”, but points out that some 30 percent of its nearly 250,000 visitors “just come to dream.”

Bearing in mind Australia’s relatively small population (about 22 million) when compared to many regions in the world, I think it’s fair to say the Sydney International Boat Show can hold its head very high indeed.

It should also be noted that the land down under is a long way “off the beaten track”, yet despite that many famed international companies, among them Mercury Marine, Chris-Craft, Beneteau, Bayliner, Yamaha, Jeanneau, Bertram, Regal, Catalina, Viking, Hatteras, Sunseeker, Princess and others find time to make their way to Australia’s largest city.

Next year will be the final Sydney International Boat Show staged in the Darling Harbour venue before a multi-million dollar refurbishment and expansion begins in 2014.

Initial plans presented to the State Government suggest the new and re vitalised venue will offer more than 40,000 square metres of exhibition space as against the 27,000 available at present.

In recent years, the BIA has had to regularly turn would-be exhibitors away due to lack of floor space.

When completed, the “new” Darling Harbour could very well see the Sydney International Boat Show not only standing equally with many of the world’s leading exhibitions, but looking down on them!

The Sydney International Boat Show, together with many of the world’s primary boating exhibitions, is a member of the International Federation of Boat Show Organisers (IFBSO).

This organisation provides a forum for the worldwide exchange of ideas along with the development of cooperation to enable effective boat shows being staged around the world.

At current membership level, forty-eight of the world’s major recreational boating exhibitions are members of IFBSO.

The Sydney International Boat Show has been a member for more than 20-years and according to the BIA has greatly benefited from the networking, show standards and ideas emanating from IFBSO.

It is all part and parcel of promoting the boating lifestyle and assisting in the growth of the recreational marine industry.

Perhaps a final word on the status of the Sydney International Boat Show could be left to a prominent identity who recently retired after a boating industry career as a marine retailer, boat broker and marketing executive spanning 50-years.

Peter Jenkins, at the time of his retirement Marketing Manager of the award-winning cruiser manufacturer Maritimo, has attended boat shows on every continent.

Of the Sydney International, he once said, “If this is not one of the top 10 boat shows on the world calendar, I’ll give the game away.”