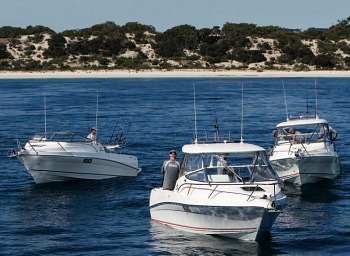 She’s built tough and ready for any offshore challenges.

A hard-top or bimini are optional and anchoring is easy. The engine box provide ample seating.

Time is usually the bane of all boat testers’ lives. This time, however, I got to spend four days on the boat at Kangaroo Island in South Australia—that’s usually more than enough time to get a good feel for any boat. But there was a problem. The weather gods were kind to us, too kind. The water around the island on this trip was as smooth as a Sydney real estate agent. You could have been out in a canoe and not got into trouble. Sure, the boat was superbly set up, but how would it handle the rough stuff? In a word—brilliantly.

During our last day on the island, we made the run from Emu Bay, via American River to Penneshaw, for a bite of lunch at the local inn. As soon as we tied up at the marina the trees on the hills around us started swaying more vigorously. By the time we’d finished eating the winds had increased to 30 knots and if we didn’t get going soon we’d be stuck at Penneshaw. Not that that would have been a bad thing—except for my deadlines of course.

Fishing in the rough

With me at the helm of the Theodore 720 Coastal Open, the rest of the three-man crew agreed that we were in for a rough, wet ride during the 35 nautical mile dash across Backstairs Passage to Wirrina Cove on the mainland. This was a customer’s boat, a man who loves wetting a line and purchased this 720 without even a bimini to hide under—because he reckons they get in the way when he’s fishing!

But nothing could be further from the truth. Out in the Passage with a 30-40 knot south-easterly blowing from the Indian Ocean and across the bow at 45 degrees, things could have been tricky, but the Theodore 720 handled the conditions with consummate ease.

By trimming the leg out to ‘one’ on the Volvo trim gauge I was able to run across the open water at 25 knots, without banging and crashing, and more importantly, without getting wet. I didn’t even need to level the hull with the Volvo QL trim tabs, so that it didn’t lean into the wind. During the entire 35nm trip we only hit two holes in the ocean and the landings weren’t that bad—we barely got a drop of water on the windscreen.

Speaking of the windscreen, this one’s at exactly the right height, so when driving while seated you have a clear view through it, and driving while standing you can see over it easily. Even when standing, the windscreen deflects the slipstream up and over your head, so there were no watery eyes or splashed faces during this trip.

Jim Theodore designed this hull with a deep forefoot (point where the leading edge of the hull, or ‘stem’, meets the keel), which is an absolute necessity in any boat regularly running in choppy water. Add to this a heavily-flared bow, aggressive chines that throw water down and away from the hull, so it doesn’t blow back inboard and the fact that this is a solidly-built boat, and the ride’s brilliant.

All Theodore 720s are built to 2C survey and below the deck is a deep and complex hollow honeycomb fibreglass stringer system that’s rock solid. A lot of fibreglass is used in these boats, which helps reduce running noise coming through the hull and stops the boat being flighty over choppy water. The combination of a solid build and the weight of the Volvo D4 260hp diesel sterndrive at the transom also help the ride. This hull maintains a level-planing attitude and with only minimal leg ‘trim out’, to raise the bow slightly, it slices through chop and swells effortlessly.

The 260hp Volvo rocketed this almost 3000kg (wet) boat out of the hole and onto the plane, but when the throttle was pulled back the boat stayed on the plane almost down to trolling speed. The helm is very responsive and little effort is needed to throw this boat into full-lock turns even at 30 knots. In calm conditions this boat cruises beautifully at 33 knots pulling 3000rpm. At WOT she hit 40.5 knots at 3500rpm.

A single Volvo Penta D4 260hp diesel is tucked under the overhanging transom bulkhead. The engine box doesn’t intrude into the cockpit too much. It’s heavily padded on the inside, providing good soundproofing, and has two cushions on top, which help to further minimise engine noise. There’s a handy grab rail between these cushions, so those seated here have something to hold onto if things get a bit rough.

This boat’s gunwales are quite high and offer good security, but they don’t cause a problem with rod butts when fishing. These also feature grab rails, so anglers can steady themselves when fighting a fish in big seas. Deep side pockets increase this boat’s storage capacity, the batteries are securely stowed in lockers on either side of the transom, the cockpit is self-draining and there’s a deck wash at the rear of the port side pocket.

A large bait board with six snapper rod holders sits above the live-bait tank, which can be lifted out to gain access to the steering equipment hidden below. The helm station is well-laid out and very skipper friendly. It features a single binnacle control and all the good gear—Raymarine C80 GPS, Navman Trackfish 6600, autopilot, VHF, CD stereo, compass, a stainless steel helm, remote for the windlass and a switch panel for bilge pumps, nav lights, accessories… and the list goes on. But these switches need some sort of cover over them, because I kept turning them on accidentally with a forearm when reaching for the radio mike or adjusting the controls on the GPS.

The cabin has a lockable sliding door and is large enough for two anglers to stretch out and spend the night ‘on the grounds’.

There’s dry storage under the bunks and a Porta Potti style loo that should keep the females on board happy. A hatch in the forward cabin bulkhead opens for access to the windlass and anchor locker. I like to leave this open when dropping, or weighing anchor, just to keep an eye on the state of play until either operation is complete.

A fishing boat for most occasions

The Theodore 720 Coastal is one hell of a boat and I’d take one just about anywhere. She’s roomy from a fishing perspective, slices through rough water like a hot knife through butter and delivers a dry ride in all conditions. Let me rephrase that; because this particular Coastal 720 doesn’t have a bimini, if it rains you’re going to get wet. A bimini, hard-top and enclosed cockpit are available as optional extras.

In calm conditions around Kangaroo Island, SA, the 720 returned the following performance figures.