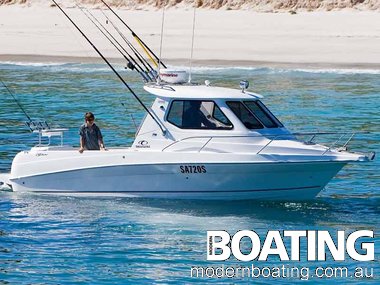 Jim Theodore used his lifetime experience as a shipwright and marine surveyor to create this classy cruiser.

The Theodore Coastal 720 is a new player in the field of large trailer boats, but it’s already made an impressive debut in its rookie year, placing highly in the 2005 Australian Boat of the Year in several categories.

This comes as no surprise to anyone who knows Jim Theodore, as this craft is a culmination of his working life spent as a professional shipwright. As warranty service agent for some of the most prestigious names in pleasure boating, Jim has seen a lot of things done well and too many done badly.

When it came time to do it himself, Jim went out of his way to design a craft avoiding all the faults he’s encountered over the years. He wanted a craft that could be examined in detail from stem to stern, from keel to hardtop and all places in between and come out with flying colours. With the Coastal 720, he’s achieved this goal.

PERFORMANCE & HANDLING
With a hull length of 7.2m and a beam of 2.5m, this is a beefy and spacious craft with excellent sea-keeping qualities, thanks to its deep forefoot, three well spaced planing strakes, solid chines and a transom deadrise of 20 degrees.

At the helm, the Coastal 720 has the feel of a much bigger craft and takes on steep, choppy seas with an aplomb that instils confidence. In rough sea conditions that would shake out your back teeth on many a craft , the ride remains soft and stable. Its nicely flared bow deflects water well away from the craft and occupants, to the point where even in an open configuration, skipper and passengers remain dry.

The craft is offered in a number of configurations and power options, the test craft being the Hardtop model fitted out with a punchy Volvo turbo diesel KAD 300, which is rated at 285 propeller horsepower. It made the Coastal 720 accelerate like a fast ski boat, bounding up onto the plane and, on the day of our test, it topped out at 43.1 knots.

The hull is extremely efficient. We estimated the vessel was planing at a low 10.3 knots and 1800rpm, while 3000rpm saw a comfortable cruising speed a touch over 30 knots. This should make for economical cruising. The craft’s standard 300lt fuel tank should also provide considerable range.

Noise levels were minimal at all speeds and the four onboard didn’t have to shout to be heard over the engine, a testament both to Jim’s construction and to the modern day turbo diesel.

The Volvo duo prop unit this craft boasts can’t be beaten when it comes to manoeuvring a vessel at close quarters or high speed. The Coastal 720 can be flung into hard turns without apparent ventilation, holding the radius as if on rails. Despite the fact the Volvo KAD 300 does bump the price considerably (compared with other powering options), my advice would be to go for it if you can afford it, because the instant throttle response it delivers is a real joy when at the helm.

Other engine options include smaller diesel or petrol stern drives and single or twin outboards, all of which should provide adequate performance at significant savings.

LAYOUT
The Coastal 720’s helm is well set up and the destroyer-style stainless wheel falls comfortably to hand with good sightlines both to the comprehensive instrument panel and over the foredeck.

The vessel can be driven effortlessly, either standing or sitting. In the generous helmsman’s chair, you can drive with your feet resting lazily on the bulkhead footrest!

Design-wise this craft falls into the day-boat category, with sleeping accommodation for two reasonable-sized adults in the typical vee-berth configuration. But the cockpit is so roomy that two or three swags could be laid out for the kids to sleep under the stars and there’d still be plenty of room to move around.

Dry stowage is plentiful onboard this craft, from the lockers below the forward vee-berths (with the obligatory Porta Loo situated between them), to the capacious compartments aft of each seat. Generously wide side-pockets run along each side of the cockpit with recessed grab rails along each side.

Much attention is paid to safety and comfort for all onboard, typified by the full-width grab rail, which follows the line of the windscreen. Speaking of lines, this is a handsome vessel, aesthetically pleasing from any angle ? from the tip of its moulded bowsprit to the rear of its moulded fibreglass boarding platform, a distance incidentally of 8.04m.

Adding to the look is a well-crafted stainless bow rail and wrap-around safety glass windscreen. And whereas a hardtop oft en spoils the overall flow of a craft’s lines, in this case, Jim has achieved a sweeping and stylish look.

CONSTRUCTION
We took the opportunity to inspect several Coastal 720s in various stages of build and were impressed both with the build quality and the various innovations inputted into the construction process.

The Coastal 720 features a hand laid-up moulded fibreglass hull, with the hull and deck joint bonded, through-bolted and internally fibreglassed. This provides great structural integrity and long-term confidence in this craft to take whatever the sea can dish out. The list of standard features is extensive and there are many options that can be added.

OVERALL
Jim Theodore’s long experience as a shipwright and marine surveyor shines through on many levels in the Theodore Coastal 720. From her rock-solid construction and substantial cleats, the high-quality forward hatch and the collision bulkhead (with waterproof access door), to the anchor locker and her flawless, gleaming gel coat.

Whether you’re a trailerboat owner wanting to move up to a larger craft (but one of impeccable standard and on-water performance), or the owner of a large moored vessel wanting to scale down to a more economical, but still practical and seaworthy craft , you should give the Coastal 720 serious consideration.

THE COASTAL STORY
The Coastal 720’s hull was designed with soft lines and has a fine entry, deep forefoot and a variable rise down to 20 degrees at the transom. This gives the Coastal 720 the ability to carry the weight of a diesel sterndrive, while still being able to offer petrol performance. What makes this cruiser get up and boogie is its ability to get onto the plane without effort. It runs fast and flat.

The Coastal’s helm station is comprehensive and well laid out. All of the gauges are easy to read and the switches are easy to locate. And there’s plenty of room up there for all the electronics a serious fisherman needs.

The structure of the vessel is in accordance with the Australian AS4132 standards in both ‘Boat and Ship’ design and strictly constructed under these guidelines. This enables the Theodore Coastal to be built to 2C survey for six passengers and one crew.

The boat was designed and built in South Australia.

ENGINE ROOM
The test boat is powered by a Volvo KAD 300 turbo diesel, although powering options include smaller diesel or petrol stern drives or single or twin outboards.

PERFORMANCE
A two-way run along the Port River in smooth conditions with four adults onboard recorded the following figures.