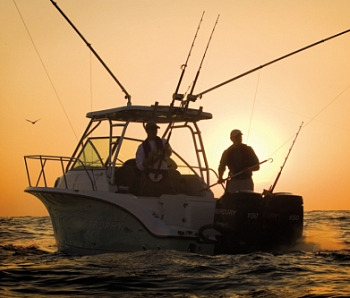 The Trophy 2502 Walkaround is a competent seagoing fishing boat, and more than useful for family boating.

Cabin sleeps two and has a sink and stove.  The transom incorporates a 114L live-bait tank, a wet well with lift-out icebox and a shower/sink.

In Trophy-speak, ‘250’ means 25ft overall length (7.6m), and ‘2’ means it is a walkaround or centre cab: as self-explanatory as BMw’s naming system.  And the style of the boat is just as straightforward: nothing on board without a purpose, and nothing missing that ought to be there.

There are various interpretations of the walkaround layout, and the 2502’s tends very much towards the usable cabin style rather than the grown-up centre console.  The decks alongside the cabin are wide enough for passage, although with not a lot to spare.  It takes a couple of steps up to get onto them, and they are not places you would want to hang around with two hands on a rod.

This results in a spacious cabin, offering bunks for two tall sleepers, a neat, basic galley, a marine toilet, and a lot of storage space.  Behind it is a very well-protected driving and sitting area for four, and a cockpit thoroughly equipped for fishing.  The forward cockpit offers space and perching places for more anglers.

Overnighting on the Trophy Walkaround

A typical American fishing style is to drive to the boat stacker in the evening, launch the boat and camp on board ready for an early start.  The cabin works well for this, and the galley is enough to knock up breakfast—provided you are alongside, because the stove is electric and, without a genset, you will need shore power.  A spirit stove, or one of those cunning combined electric-spirit jobs, would be a better fit for Aussies who want to overnight at anchor or even make a non-fishing weekend cruise.

Of course, for cruising, most people would go for a cockpit barbecue anyway.

A useful standard piece of equipment, for cruising or any other kind of boating, is the 45L waeco fridge/freezer.  This tucks under the cockpit deck, making no intrusion on cabin space.  And for civilised dining, a removable table converts the bunks into a dinette.

The toilet lives under a lifting section of bunk on the starboard side, away from sight lines through the port side entrance.  The entrance features a bi-fold door and a particularly neat hatch that swivels and disappears into the cabin structure.

The Fishing Boat for the Fisherman

This is primarily a fishing machine, and all the gear is here.  The thick transom, in particular, is a concentrated angler’s station.  It houses a whopping 114L live-bait tank, a combined sink/transom shower, and a wet well containing a smallish icebox for less exotic bait.  It also houses the bait board, which you lift out and clip on.  The transom lounge drops down for fishing operations, giving extra padding to the permanent coaming upholstery.

As well, the bottom edge of the lowered seat makes a fairly effective toe rail.  The cockpit sides have purpose-built
toe rails installed below the rod racks and are very welcome, because the coamings are a shade low at about one third the way between knee and hip, and there are no grab rails aft of the hardtop support.

Primary catch stowage is in a large icebox mounted below the skipper’s seat.  Removable catch tanks always strike 58 me as logical: less handling of the fish and less cleaning up to do, and probably better insulation of the ice slurry.  A locker is below the navigator’s seat, and two more under the jump seats behind the first-class seats.

Stability at rest is an essential quality in a stand-up-and-fish style boat, and the Trophy showed itself to be stable.  There was plenty of up and down in the ocean, and three sizeable people on board to test it.  With three at the rail, in conditions most people would choose not to fish, the list was only slight and waves rolling under caused no problems.

Review day for the Trophy 2502 Walkaround was one of this year’s curious early summer Perth days, with a screaming sea breeze coming in shortly after breakfast.  We decided not to
spend much time beyond the inner reef—not that we were looking for a comfortable ride, you understand—it was all to give the boat a chance to stretch its legs.  And they were long legs, courtesy of a 300hp Mercury Verado.

Trophy rates the boat up to 400hp, with a twin installation, and it is difficult to see anyone going that high.  We only very briefly hit full throttle, but reached 45 knots (also very briefly), and that is a speed rarely achievable let alone sustainable in open waters.  At more realistic throttle openings, we found the natural trolling position at 2000rpm and 5.6 knots, and a likely cruising speed of 24 knots at 4300rpm.

At speeds that were unreasonable for the conditions, I was expecting to get a pounding and to get wet; in both cases I was wrong.  The 2502 cushioned us very effectively.  The only noise it made apart from the motor was a small rattle from the cabin door.  The bow has an almost unfashionably large flare, but it threw down any water succeeding in getting past the reverse chine that extends to the stem.  All this meant the windscreen stayed dry and we did not use the twin wipers.  The wipers are necessary, though, because sitting or standing you look through rather than over the windscreen.

The hardtop is a simple and light fibreglass awning carried on a tough frame that provides grab rails for standing passengers, and hand-holds for traversing the side decks.  It throws shade over the four forward seats, matching the side protection of the rearward cabin extensions.

The quality of the fittings was more than acceptable, although the Trophy rails with their riveted unions always jar a little.  The builder provided a total of seven cleats, which is generous, although one of them was for the anchor line when a bollard or similar would be easier to use.  On the subject of anchors, stowage for ours was in mouldings within the cable locker; it did not leave room for a long cable.

A lot of detailed thought went into the stern area.  Besides the tricky transom, the ladder is neatly housed under a lid on the boarding platform, and under the cockpit step ahead of it is the equally neat battery stowage.  The self-cancelling trim tabs and their rams, which we did not use on the day, are recessed into the transom out of harm’s way.

The Trophy 2502 is a competent seagoing fishing boat, and a more than useful family all-rounder.  At the time of review, $145,000 got you a lot of boat for your money.