US premiere for Riviera and Belize’s striking new models 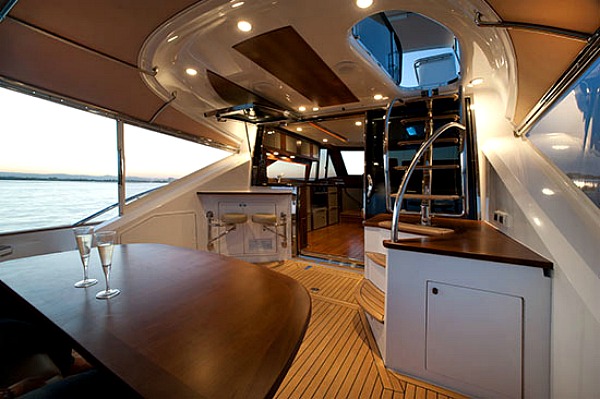 The striking new Riviera 50 Enclosed Flybridge and Belize 54 Daybridge from Australia's favourite and most awarded luxury boat builder will premiere at the Miami Yacht and Brokerage Show held from February 13-17, 2014.

Created in-house using industry-leading Unigraphics 3D software, the new 50 is an entirely new Riviera from the keel up and represents the very latest in design and technology.

Riviera's team of talented and passionate international designers and engineers have focused on absolute maximisation of this brand new design in every minute detail. This sophisticated software allows Riviera's designers to see the exact size, space and scale of every aspect of the boat in the computer long before a single piece of timber is cut for the plug work.

"I have no doubt that the Americas will fall in love with the new 50 Enclosed Flybridge and the new Belize 54 Daybridge and we are pleased to be to be showcasing these new designs, which are the epitome of luxury," Mr McCafferty said.

"From the moment you step onboard Riviera's new 50 Enclosed Flybridge you will sense this is a new approach from Riviera," Mr McCafferty said.

"The new Belize Motoryacht line has attracted a lot of interest from boating enthusiasts in many different markets around the world and following on from the successful US launch of the Sedan in October, the Americas are eagerly awaiting the arrival of the next model from Belize Motoryachts.

"The new Daybridge is scheduled for shipment in December and will be hull number 10, which is a huge vote of confidence for the Belize Motoryacht brand and demonstrates the immediate acceptance of Belize.

"We look forward to premiering the new Belize 54 Daybridge and Riviera 50 Enclosed Flybridge at the Miami Yacht and Brokerage Show in February.

"The Miami Yacht and Brokerage Show has always been one of Riviera's most successful international boat shows and in our 13th year at this show, we are pleased to retain our prime display location at the southern most end of Collins Avenue."

The new 50 Enclosed Flybridge is bristling with surprises and innovation, from the most modern technology to time-honoured craftsmanship.

It boasts plenty of cockpit storage with a self-draining moulded lazarette bin that has been integrated into the cockpit floor, tender storage on the boarding platform, increased side deck access, and a large aft L-shaped lounge that runs the width of the flybridge.

Riviera's chairman and owner Rodney Longhurst said Riviera's design team had retained elements of the distinctive Riviera look while introducing some exciting new design aspects. The striking exterior profile of the 50 is just the first indication that this is an entirely new style of Riviera.

"In a first for Riviera, the 50 offers twin transom doors in the cockpit to allow better access from both the port and starboard sides. The large cockpit features lounge seating with integrated and interchangeable table to provide a versatile alfresco entertaining area, while an island storage centre offers space for an optional barbecue or live bait tank making this vessel the ideal on water entertainer or sport fisher," Mr Longhurst said.

The saloon offers an extensive seating arrangement with a U-shaped lounge directly opposite a three-seater settee. The centre of the three-seater settee can be pulled out to form an ottoman or additional seat at the dinette table, while an optional two-seater table can be raised between the two remaining seats. This innovative seating arrangement can create extended dining for up to 10 people in the saloon, while still providing ample room for relaxation. Forward of the saloon is a television which can be raised from the dash and can be easily viewed from all seating positions, even from the cockpit. Another clever design feature is the light-well dash, which brings light into the companionway and lower accommodation deck.

An internal staircase leads to the spacious and comfortable flybridge where a large aft L-shaped lounge runs the width of the flybridge, a chaise lounge is adjacent to the helm which features two adjustable helm chairs, great for conversing with the skipper while underway. An abundance of lounge seating in the Flybridge makes it the ultimate skylounge for relaxed socialising and extended cruising.

Below decks is a flexible accommodation plan featuring three very equally generous sized staterooms. The master stateroom can be forward or aft and has an ensuite bathroom in both layouts to allow owners to truly personalise their boat. The two aft cabins offer generous headroom while large hull windows with opening portholes on both sides give an abundance of natural light and fresh air. Optional hull windows are available for the forward cabin.

The latest design from the Belize Motoryachts collection, the 54 Daybridge, follows hot on the heels of the popular Belize 54 Sedan, which premiered at the Fort Lauderdale International Boat Show in October.

Both the Daybridge and Sedan feature wide walk-around side decks, large cockpit with rear lounge, a hi-lo table and breakfast bar with twin swivel stools to port. The generous size swim platform features a centre section that rises and lowers hydraulically to allow easy access to the transom's electric tender ‘garage', which has plenty of space for a three-metre tender and outboard that can be easily loaded by the built-in electric winch.

The Daybridge is truly an outdoors experience, which is why a lot of attention has been devoted to making the most of that experience. An elegantly curving deep-tread staircase leads from the cockpit up to the Daybridge where the open-air feeling makes for an exhilarating boating experience.

Not only are the design features impressive but so too are the twin Cummins Zeus 600hp diesel engines and pod drives delivering a speed of 30 knots and a range at cruise speed of approximately 448nm with the installation of the optional long range fuel tank.

Be the first in the US to inspect these striking new designs at Riviera's Collins Avenue floating display.