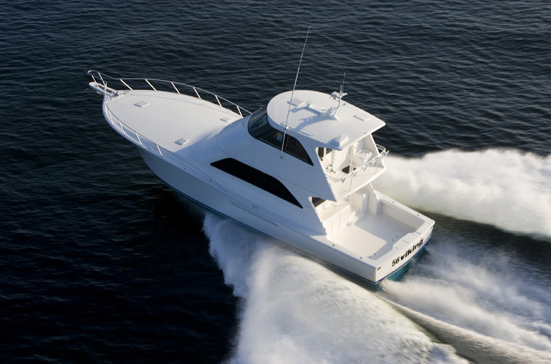 This awesome ocean brawler likes it rough. The absurd reality of testing boats is after a while you become blase about vessels most people would spend a lifetime aspiring to own.

But this isn’t the case with the Viking 56. Her sheer magnitude ensures this craft will never be taken for granted. She’s etched on the Modern Boating’s log of awesome vessels forever.

Even at idle, the team realised something special was going to happen during our short voyage wide of Broken Bay, because any boat that consumes 32lt per hour at 650rpm is bound to have some awesome power below decks.

The Viking 56 is a purpose-built American off shore game fishing vessel designed to deliver exceptional ocean going performance. And she doesn’t compromise in the pursuit of big fish.

She’s got it all. A clean stern, heavily-flared Carolina bow, gothic fighting chair, vast aft cockpit, plenty of refrigerated storage and 2800hp of diesel grunt to get you there bloody fast!

LET’S GO FISHING
The Viking 56’s serious approach to game fishing is highlighted by the mother of all game chairs, planted firmly in a cockpit. This is the ‘zone’ and it has loads of tackle stowage, lighting, oversize fittings and wide combings.

During this test, Ron Jacobs from Blue Water Power Yachts, was eager to demonstrate the vessel’s exceptional reverse thrust performance, because backing down on a big blue or black marlin during the fight can result in the cockpit becoming awash.

When everyone onboard is focused on the big fish at the end of the line, the boat has to be extremely manoeuvrable. Sometimes the skipper has to gun the boat in reverse at 6 to 7 knots to minimise the amount of line a hard running fish can strip off the reel.

On this day in moderate conditions, backing down at speed wasn’t a problem, with only splashes of water coming over.

LIKE A BATTLESHIP
The Viking is built like a proverbial battleship to handle big seas. Her flared Carolina bow, absence of forward facing windows and no topside portholes, allow the Viking to go through waves if need be in furious conditions. She has two watertight bulkheads dividing the engine room from the accommodation, sealed cockpit hatches and a big step up to saloon. So, even if the cockpit is completely awash the boat will still be OK.

Plus, if things do get out of hand, the engine’s cooling system is set-up with seacocks that can draw water from inside the boat. Yep, in a moment the engines’ water pumps can be converted to massive bilge pumps to empty a flooded engine room quickly.

Ron explains that people who know their fishing boats are blown away by the attention to detail in the engine room. A quick look reveals two huge 1420hp CAT diesels, serviced by visible dual fuel filters for each engine, a freshwater maker, repeated engine instruments at the engine room entrance and packless shaft seals. These seals are enclosed in boxes with their own bilge pumps, which, in theory, should keep the rest of the engine room totally dry.

AT SEA
Majestic is the best word to describe this vessel at sea. The mild swell and chop during this test were mere toys for the Viking to play with. In turns she demonstrated her awesome power with no loss of headway. The conditions may have been slight, but there was enough length to the swell to gave us an idea of what this vessel would be like in bigger seas. She likes it rough. I spent plenty of time at the helm and the small stainless steel wheel, but I was afraid to put too much power on, because next to the tachos and speedo were the fuel consumption readouts. And even though these were in gallons per hour, it didn’t soften the blow.

At a fast cruise of 31 knots the consumption was around 100 gallons per hour. This translates to 450lt per hour, which with current fuel prices, is around $10 per minute.

At cruise speeds around 21 knots the vessel’s 2840hp consumed a more manageable 240lt per hour, which Ron says is about 30 percent above the average, locally-built 45 footer.

LAYOUT
The helm and bridge styling is minimalist and engine noise throughout the vessel is low. There’s plenty of room on the flybridge. It features a lounge forward of the helm, air-conditioning and good visibility forward and aft .

But the Viking 56 does have some traits that non-fishing folk won’t appreciate; like the steep ladder up to the helm and a bowrail that doesn’t extend all of the way from the football field-size bow to the cockpit (designed to minimise damage if the bow goes through a few big waves).

The Viking 56’s saloon is air-conditioned and finished with leather and teak. It features a large, well-equipped galley to port, opposite the dining area. Step down to the air-conditioned accommodation area and you find two bathrooms and three bedrooms. The owner’s berth is amidships. There is not a lot of natural light down here, which is part of her battleship-design, so 12V down lights illuminate the area. There’s also a washer and dryer in the main bathroom. Onboard entertainment is provided by three LCD televisions and a quality sound system.

OVERALL
The Viking 56 is a thundering lump of luxury fishing vessel with only one thing on her mind: to get there fast and come home with the goods. Like all Vikings, she’s a thoroughbred fishing machine that has gained the respect of the most demanding game fishermen in America.

VIKING’S HISTORY
Viking has been building fishing boats on America’s east coast for around 40 years. Its range starts at 45-feet and ends with a 74-foot monster. Viking builds around 100 vessels per year.

With no small boats in the Viking range, the Modern Boating team reckon the average Viking owner would know their stuff, having spent many hours on smaller vessels. But with a price tag of A$3m, the step up is quite a large one.

One of these boats represents the end of the road when it comes to the pursuit of game boat excellence.

PERFORMANCE
During this test the following performance figures were obtained: