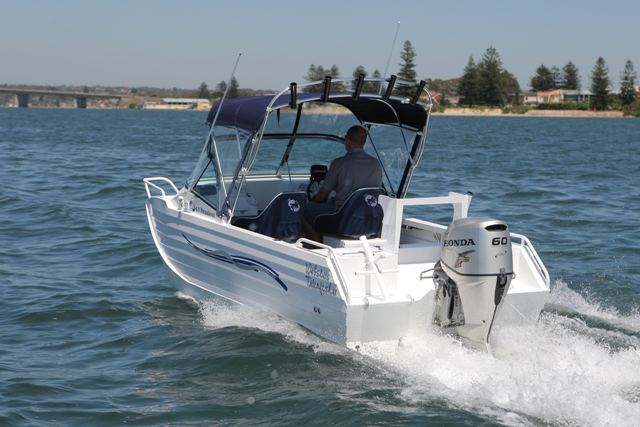 The established benefits of a catamaran hull – stability and ride quality – shine through when you take the 4.3m runabout, or 5m centre console, for a spin. But this pair of Twin Fishers also exhibit some of the less desirable qualities of cat-style boats.

On the plus side, both test boats deliver a soft ride and are as solid as a rock at rest. That should impress any boatie – cat lover or not. But they both also squeezed spray out of their tunnels and push it away from their bows in such a way that it is immediately sucked back inboard as a fine mist. As a boat tester and cat owner – I currently run a cat myself – I feel it’s important to be up front about this typical cat-phenomenon.

Just about every cat on the market suffers from this effect. But as there isn’t a boat in the country that’s perfect in every aspect, you have to weigh up the pros and cons before settling on the boat that’s right for you. To solve the problem on my own boat I had to fit an expensive set of clears around its centre console.

In essence, the 4.6m and 5m Webster Twin Fishers are no nonsense workboats. The welds, ribs and braces are clearly visible and the decks are made from checker-plate. By today’s standards the layouts are fairly spartan, but extremely effective. The 5m Twin Fisher Centre Console has a wide console with a padded ice box for seating and a raised foredeck.

The Modern Boating team wouldn’t opt for the shade canopy fitted to the test boat, because it reduces an angler’s ability to fish all around the boat, which is what centre consoles are all about. That aside the interior ergonomics are excellent. Centre consoles are supposed to have 360-degree fishability, yet few boats deliver this as well as this Twin Fisher does.

Aft of the console the cockpit sides are easy to brace against with your toes fitting under the wide gunwales for even more stability. There is also no interference from the side storage pockets fitted beneath them.

The cockpit deck goes forward to meet the foredeck without interruption, but you must remember to step up onto the raised section as you go forward. The only compromise to the 360-degree toes-in-under leg support is caused by the fuel tank located centrally against the transom just in front of the motor.

A pair of flush-mounted hatches covers the storage space under the raised forward section of the deck. This raised deck section drops back to the hull to form an open, full-width well in the bow under the foredeck. An anchor well is set into the foredeck and features a central cleat, fairlead and a sturdy split bow rail.

If you live in an area where there’s a need to carry additional anchors, and perhaps a buoy to raise a reef pick from deep water, this is one of few boats we’ve seen where both anchors, separate ropes and a buoy can all be stored close at hand. There’s no need to carry milk crates and the likes in which to store the extra paraphernalia.

The console of the 5m boat is large and houses a dry storage locker with a clip-on vinyl cover across its back. Trailerboat Marine in Brisbane fitted this locker, and the big icebox used as a helm for our test.

These Twin Fishers get another tick in the box for their comfortable helm ergonomics. While I am driving my forward vision when standing is slightly obscured by the windscreen frame, but this is only because of my height. Other members of the team don’t have this problem.

The console has grab rails that double as supports for the windscreen frame with plenty of space for left over sounder/GPS and the other electronics that go hand-in-hand with fishing these days. The smaller Twin Fisher runabout’s transom arrangement is almost identical to that of the 5m centre console.

The 4.6m runabout we tested has been set up for a customer who intends to operate in some out of the way locations. Among other things this boat has a bigger fuel tank, which encroaches even more into cockpit space than the one in the 5m vessel.

Also this 4.6m model has twin batteries on a shelf tucked away under the aft covering board, while the 5m version has a single battery on an identical shelf with a live bait well taking up the equivalent space to port.

In the helm station the 4.6m runabout has twin moulded-plastic bucket seats mounted on boxes. Wallace Kienzle, the test boat’s proud new owner, has fitted a canopy over the seats and a full set of clears to complete the weather protection.

The 4.6m runabout’s windscreen opens in the centre to access the anchor well out on the foredeck. Some of the shorter members of our team, such as me, find it a bit of a stretch to the fairlead, but again taller folk should have no such problems. A rod locker along the runabout’s port side is another of Wallace’s options.

As much as the team like the centre console, it’s the well laid out runabout that gets most of the ticks in the box. But this should not be misconstrued as a put down for the 5m boat. It’s just that the smaller boat appeals to the fisho in us all.

At rest both vessels sit lower in the water aft. This is another cat phobia, but it doesn’t adversely affect either boat.

Speaking of phobias, these cats lean – what mono hull owners say is the wrong way – in turns. Mono hull owners will also notice the different way cats move under them at rest. But they should still appreciate the boat’s static stability.

On the power side of the house, Webster’s mount a single outboard on a central pod, which they integrate into the transom with a boarding platform on each side.

Clamber underneath these boats when they are still sitting on a trailer and you’ll see that this pod tapers forward into the tunnel in a wedge shape. This deflects water flow through the tunnel around each side of the outboard leg giving the prop a better bite on the water.

Both of these boats perform flawlessly in hard turns. This alone adds Webster Twin Fishers to that select, not to mention short, list of single outboard aluminium cats that actually work.

Under the waterline both the Webster Twin Fisher hulls are constructed from 3mm plate. The sponsons form integrally sealed chambers with the deck and 2mm thick topsides attached to them.

Webster Twin Fishers aren’t quite built like brick outhouses, despite my utilitarian description, but at 300 odd kilograms for a 4.6 hull and 450kg plus for the 5m version they are not lightweights either. But when talking boat weights you must remember the weight saving here over other cats mainly comes about because the Twin Fishers only run single outboards.

Engine Room
With a 60hp two-stroke Tohatsu on the 4.6m boat and a 90hp Tojo on the 5m model, the boats were well powered. Both boats lifted easily onto the plane and cruised along like good cats do, slicing cleanly through any chop that got in their way.

It should be noted that the extra weight of the fuel and batteries set aft in the 4.6m boat has been compensated for by fitting an SE Sport 3000 foil to the Tohatsu’s leg. The boat ran well with the foil attached, but it would be interesting to see the difference in performance without the foil.

The 5m Twin Fisher, with the three-cylinder 90hp Tohatsu on the back, exhibited all the typical power-catamaran characteristics during performance testing. Fitted with a 15″ aluminium prop the 5m boat had a WOT speed of 27.9 knots at 5500rpm.