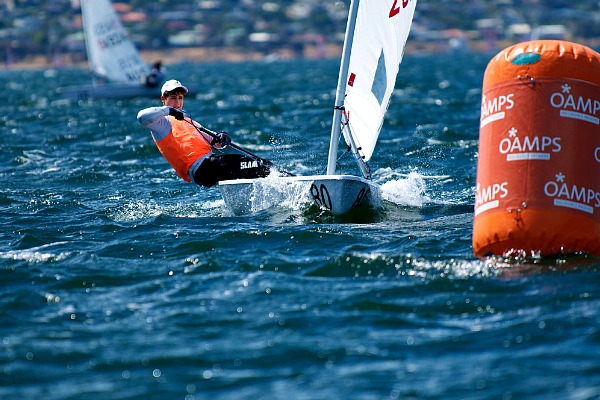 Racing has wrapped up at the 2013 OAMPS Insurance Brokers Australian Youth Championship in Hobart, with new national champions crowned and positions on the Australian Sailing Youth Team secured.

The 160 crews faced shifty conditions on the River Derwent, with plenty of gains and losses across the five classes on the final day of racing.

Reigning Laser Radial champion Mark Spearman had the perfect day on the water with three wins from three starts securing him the title and giving him the chance to defend his ISAF Youth Sailing World Championship gold medal from 2012.

Spearman won seven of the nine races throughout the week, with Thomas Vincent second and Christopher Andersen third.

“Today was a really good day for me and I managed to win all three races but all were really close, tough, wins,” said Spearman. “I’ve now got the challenge of defending my Youth Worlds title, it’s always much harder to win the second time around.”

Evans finished the regatta seventh overall, with a number of top 10 finishes across the four days of competition, with Anna Philip and Emma Barton the second and third placed female competitors.

“It’s been so tough,” said Evans. “The conditions have been shifty and up and down in pressure, it’s just been crazy, but I managed to do alright and am looking forward to my second Youth Worlds.”

The 29er title went right down to the wire, with the top two crews of Harry Price and Angus Williams, and Charlie Wyatt and Lewis Brake, tied on points heading into the final race.

Price and Williams had clawed back the points difference to Wyatt and Brake throughout the day, winning the opening two races on Thursday to make it a winner takes all final.

Price, younger brother of London 2012 Olympic Games silver medallist Olivia Price, and Williams, who have only been sailing together for just over a month, came out on top with their final race third, compared to Wyatt and Brake’s fifth, enough to win.

“It’s been very close all week,” said Price. “We managed to scrape into the overall lead in the final race by staying ahead of our opponents. Overall it was a really good day with two firsts to start with, meaning all we had to do was beat second in the final race and we did that.”

Victorian sailors Tess Lloyd and Eliza Solly claimed the girl’s title, finishing fifth overall, crossing the line in the top 10 in all but one race during the week. Nina Long and Nathan Edwards were the first placed mixed crew.

Jock Calvert became the first Tasmanian sailor to make the Australian Sailing Youth Team for a number of years with his win in the Bic Techno 293 class.

Calvert had a second and a pair of wins on the final day, giving him the title ahead of Antoine King and Hugh Jones.

“It’s pretty cool to get the win, I’ve spent the last 11 months training five times to get here,” said Calvert. “It was good to get the results and come out on top.

“There were only four points in it going into today so I had to put a few in the bank and did that,” he said. “I’m looking forward to representing Tasmania, that’s probably the best part of all of this, it’s nice to come out of a little state down the bottom.”

New South Wales sailor Annalise Gilbert will compete at her third ISAF Youth Worlds after winning the girl’s title in the Bic Techno 293, finishing ahead of Samantha Sterling and Lara O’Brien.

“To go to my third Youth Worlds is pretty exciting, I’m really looking forward to it,” said Gilbert. “Going to two before this one will be a big help and hopefully I can improve on my results.”

Lachlan Gilmour and Thomas Blaauw have qualified for their first Australian Sailing Youth Team following their win in the 420 class.

The pair overcame a horrible start to the regatta, a black flag in race one, to work their way up the leader board and take the win on the final day with three wins from three starts.

“It wasn’t the best of starts but we came back together and managed to get over the line and get the win in the end,” said Blaauw. “We’ve been training for this for the last two years, it’s been on our mind at every training session and something that we really wanted.”

“We’re looking forward to the opportunity to race at the Youth Worlds and hopefully we can top David’s results from Brazil in 2009,” said Gilmour.

West Australians Carrie Smith and Ella Clark will compete at their third straight Youth Worlds following their win in the 420 girl’s class. Smith and Clark, who won silver in Ireland in 2012, will be looking to go one better in Cyprus this July.

“Last year we did two times better than the year before so hopefully we can do it again and move up,” said Smith.

Smith and Clark finished the week fifth overall, one ahead of the second placed girl’s crew of Monique de Vries and Danielle Carr. Nia Jerwood and Lisa Smith finished third in the girl’s class, with Sophie McIntosh and Scott Charlton the winning mixed crew.

Conor Nicholas claimed the Laser 4.7 title, saving his best till last with a win in the final race. In a consistent week Nicholas only had one result outside the top 10, finishing two points clear of Finnian Alexander and Jack Felsenthal, with Alexander getting silver on a count back.

Joining the crews for the presentation evening was Australia’s multihull representatives Paul Darmanin and Lucy Copeland.

Full results and images are available at www.youthchamps.org.au, with video highlights at www.youtube.com/YachtingAUS.